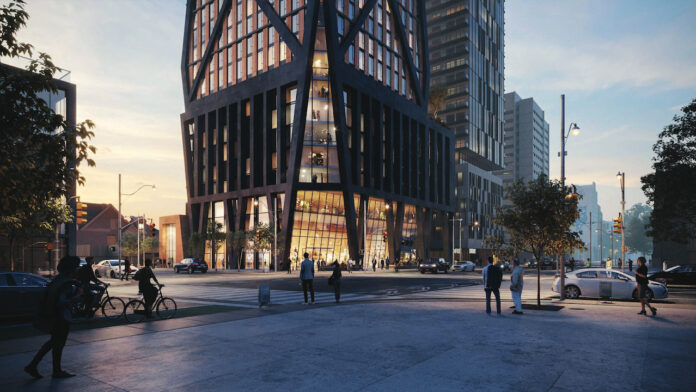 First Capital has filed applications with the City of Toronto to amend the zoning regulations and approve the site plan for a property on the northeast corner of Bloor Street West and Spadina Road. If approved, a 37-storey mixed-use infill development by BDP Quadrangle will be built on the site, which is characterized by an exoskeleton on the outside.

The proposed development at 328 Bloor Street West would consist of an eight-story podium with retail uses on the level topped by a 29-story residential tower. The total height of the building is 114.92 meters including the mechanical penthouse. On the ground floor, the sales area in front of Bloor is to be 628 m². The overall development would have a gross floor area of ​​31,231 m² with an FSI of 14.09.

On the assembled property there is currently a one-story bank and a three-story building with commercial uses on the ground floor, including shops and restaurants as well as rental apartments above.

328 Location of the Bloor West site, image by filing with the City of Toronto

Immediately north of the site is Spadina Underground Station, a transfer station between lines 1 and 2 of the TTC subway system, the 510 Spadina tram and the Davenport 127 buses.Immediately east of the property is Bloor Street West 316, which currently consists of a three-story office building and a guarded parking lot, but where an approved development application for a 29-story mixed-use building with condominiums and commercial space is in degrees. Immediately south of the site (on the southeast corner of Bloor and Spadina) is Matt Cohen Park. Immediately west of the property, on the northwest corner of Bloor and Spadina, is a three story retail / office building and six story office building at 350 Bloor Street West. At this location, an application is currently being made for rededication for the construction of a 35-story mixed-use building with a six-story podium and level retail.

Massaging 328 Bloor West, alongside neighboring proposals, picture from filing with the city

The ground floor also includes a POPS (Private Owned Publicly Accessory Space) of 91 m² along Bloor and 450 m² along a planned woonerf or “living street” that would create a north-south connection in the middle of the block to Paul Martel Park. The podium is intended to increase the width of the sidewalk from east to west to the corner of Bloor and Spadina. The enlarged pedestrian zone is intended to function as a POPS, framed by the architectural pillars that extend from the planned building.

The second floor is to be used as a bicycle cellar and offers 402 bicycle spaces for residents and 45 spaces for visitors. The third floor comprises 272 m² of open space in the outside area along the north side of the site podium and approx. 85 m² of indoor fitness area for residents. Eight residential units would also be built on the third floor. Floors four to eight are to contain 13 residential units per floor as well as lockers for suites. The typical tower floor slab begins on the 9th floor.

Vehicle access is proposed via the Woonerf link to Madison Avenue along the eastern extension of the property which provides access to the underground parking and garbage / loading area. A total of 61 parking spaces are planned in a 2-storey underground car park, 3 of which are barrier-free. The developer argues that a reduced number of parking spaces depends on the availability of underground, trams and buses in the immediate vicinity of the building.

328 Bloor West Site Plan, image by submission to the City of Toronto

You can learn more from our database file for the project linked below. If you wish, you can join the conversation in the related project forum thread or leave a comment in the space provided on this page.

UrbanToronto’s new data research service UrbanToronto Pro offers comprehensive information on construction projects in the greater Toronto area – from offer to completion. In addition, our subscription newsletter New Development Insider lands in your mailbox every day so that you can follow projects during the planning process.