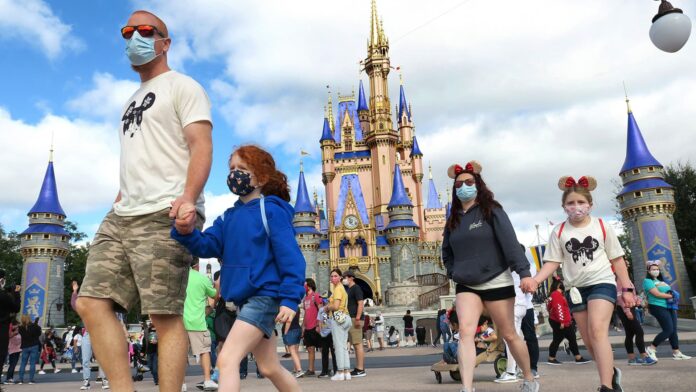 A masked family walks past Cinderella Castle in the Magic Kingdom at Walt Disney World in Lake Buena Vista, Florida.

Activist investor Nelson Peltz is planning a proxy battle for a seat on Disney’s board.

Disney offered Peltz, founding partner of Trian Fund Management, a role as board observer and asked him to sign a standstill agreement, which Peltz refused. Here are our thoughts on the situation.

Offer of board observer position

Sometimes a board observer position can be advantageous, particularly for investors who do not have much board experience and are less likely to contribute regularly to board discussions. But offering Peltz a position as board observer is like saying to Whitney Houston, “You can join the band, but you can’t sing.” There’s no way Disney thought for a second that Peltz would accept that offer, and there’s no way he should have accepted it.

Why is this happening?

It’s odd why Peltz started this proxy fight in the first place and why Disney is fighting back. Peltz acquired his position when Bob Chapek was CEO and likely planning to replace him with someone Peltz had already identified. That would have been a great activist plan, but it went awry a week later when Disney announced it had replaced him with former CEO Bob Iger. Knowing Trian’s history and process, the company had likely been working on this plan for many months, waiting for the perfect time to build their position. It’s unfortunate that all of Trian’s hard work in developing his plan was somewhat undone, but at this point the company should have regrouped and developed a different approach, taking into account the new circumstances. This plan should not have involved opposition to Iger. While Trian says it doesn’t now oppose Iger as CEO, the company was initially opposed, and that made it very difficult for the board to agree on a board seat for Peltz. However, a strong board with a strong CEO — who is admittedly a short-term CEO — should have no problem with a veteran shareholder in the room who might have an unpopular opinion. Actually, the board should welcome it.

Trian made a presentation setting out his case. In proxy struggle presentations, each side uses the facts and data to paint a picture that benefits them, and often these claims do not stand up to scrutiny. For example, Trian questions Disney’s total shareholder return under Iger: 270% versus 330% for the S&P500 about the same time. I’m not sure how that compares to the industry, but I suspect they would have taken advantage of this if industry returns were more favorable to Trian. As British economist Ronald Coase said, “If you torture the data long enough, they confess everything.” In this case, we can say that Bob Iger was a bad CEO for Disney. Trian also has objections to Iger’s decision to take on Fox, and he should – in hindsight it was a terrible decision. But he should also include in this analysis Iger’s decisions to acquire Pixar, Marvel, and Lucasfilm, which have grossed Disney more than $33.8 billion at the global box office, and billions more in merch and theme park expansions.

All of that criticism of proxy battle tactics and strategies aside, and regardless of how we torment the data from Peltz’s record as a director, of course he should be on Disney’s board of directors. He is a major shareholder with a strong track record of creating value through operational, strategic and capital allocation decisions. No, Peltz won’t be the most valuable director when it comes to deciding who to star in the next Disney blockbuster or what rides to build at the amusement parks — the board is relying on management for those insights. But he will be the most prepared and valuable board member when it comes to providing financial analysis on the various strategic and capital allocation options available to Disney and advising the board on what decisions are best for shareholders. Peltz has also proven to be a valuable director in helping management teams reduce operating expenses and improve margins, which Disney could use. And if his past is any indication, he’ll likely be good friends with Bob Iger by the end of his tenure.

Unfortunately, I think the deck is stacked against Peltz here. It’s a Herculean effort to get large institutional investors to vote against the board of an iconic company like Disney. This task becomes even more difficult when the company has just removed its CEO and replaced him with a respected former CEO and replaced its chairman. On top of that, Disney recently came to terms with another high-level activist, Third Point, who had many of the same suggestions that Trian is making. I believe Institutional Shareholder Services and large institutional shareholders will give this new team at least a year to work on their plan before endorsing further changes to the company. And I don’t think the universal proxy is going to make much of a difference in a proxy battle for a director on a unified board. However, while I don’t own Disney stock in my fund, my 10- and 12-year-olds have a small number of shares, and when their ballots come in the mail, we’ll be voting for Nelson.