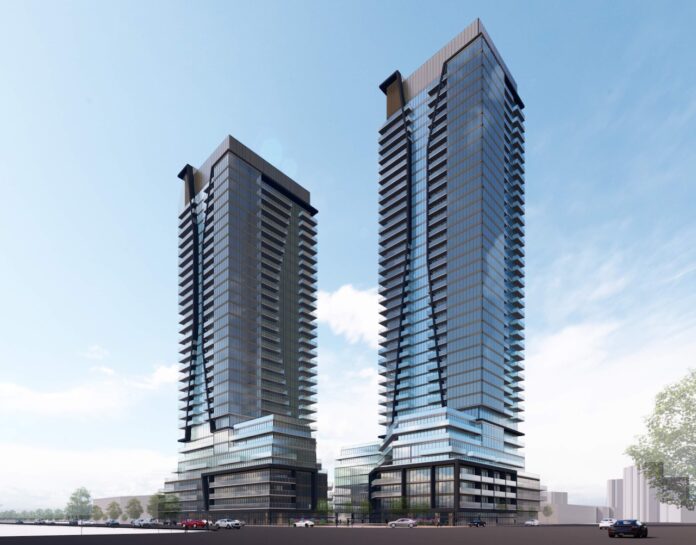 In late July, the city was presented with a proposal that would permanently transform the fabric of the Malvern neighborhood in northeast Toronto and put the low-rise suburban area on the path to urbanization. The proposal envisages the creation of a masterplanned, multi-tower community to be progressively developed over the following decades on the site of Malvern Town Center shopping centre, eventually leading to the demolition and redevelopment of the shopping center into a complex of 13 mixed-use buildings would. use towers. Davpart are the developers behind the major project and are working with IBI Group to continue the first phase of development.

With Zoning By-law Amendment (ZBA) and Official Plan Amendment (OPA) applications already in the pipeline, UrbanToronto sat down with the project’s planner, Andrew Ferancik, Principal at WND Associates, to discuss the details of how one of community planned according to a master plan can be brought to life.

“I see it as a great opportunity to realize what could be a really interesting mixed-use community on a large mixed-use site,” said Ferancik. “As a city center it has the potential to be a catalyst for the urbanization of this area.”

How a master planned community begins is similar to any development. It starts with a thorough and researched plan that is put into action over time. However, with a development of this magnitude, Ferancik explained, a certain amount of foresight is essential. With 10 development phases outlined in the proposal over a 20 to 30 year period, the OPA sets the guidelines by which future construction work will be guided.

“None of us have a crystal ball,” Ferancik said when asked how he handles planning decades in advance. “We do our best to look ahead and anticipate tomorrow’s needs, and so we set the framework for the master plan based on what we know today.” These known facts are the building blocks for long-term planning, and for this development, Ferancik has several to work with.

For starters, development was designed within the guidelines of policies such as the city’s growth plan, which sets targets for increasing density. What Ferancik sees as more promising for the project, however, is the forthcoming extension of high-speed rail linking Malvern city center to the rest of the city’s rapid transit network via the Eglinton East LRT extension.

With this major infrastructure project on the horizon, Ferancik explained that aligning development with transit is the basis of the proposal. “Where you actually have this big investment in rapid mass transit that we’re seeing here with the LRT, it’s incredibly important to get it right and set the tone.”

However, what makes it so important is not just the convenience of getting around, but the development of an area from a suburb to a city. “Transit-oriented development almost always seeks to add higher density,” Ferancik said. “It strives to create an urban environment, a place that looks and feels like a city.” To him, that means being a place that’s walkable, bikeable, and accessible without the car dependency support financially.

North elevation of the 8-story landings of the 2 towers in Phase 1, image courtesy of WND Associates Ltd

One of the biggest challenges the project will face on its way to construction is gaining the support of a community that doesn’t want to lose their mall. “I can guarantee there will be a sense of restraint,” Ferancik said. “This isn’t a community that’s seen much development over the past few decades, so we’re very grounded.” He hopes to understand this reluctance and be open to discourse with the community to move forward. “There will be many consultations to inform the public,” he said. “And I think there’s a great opportunity through informed discussions for community members to make meaningful contributions.”

Such processes are not unknown in the striving for urban development on the outskirts of Toronto. Ferancik explained that as a resident of the North York Center he has seen the impact of urban change first hand. Looking at what was working in his community, he concluded that “you have to embrace poetry. It’s a tough pill for those who have lived in the community for decades, but it’s a critical part of how the region must manage growth.”

Against this background, however, Ferancik reiterated that the project has no intention of demolishing the mall all at once. Phase one, in which two towers of 39 and 32 floors will be built, will not require demolition at all as it is to be erected over part of the above-ground parking lot; It will also not be necessary to remove a significant number of available seats. “In that regard, it’s great news to complete the first phase of development,” said Ferancik.

With a strong design by IBI Group, the first buildings will also be closest to the future LRT station, boosting the relationship between two infrastructure projects that will evolve. In conclusion, Ferancik expressed a general sense of excitement. In simple terms, he said, “It’s an opportunity to bring urbanity to an area that currently lacks it.”

UrbanToronto will continue to monitor the progress of this development, but in the meantime you can learn more from our database file linked below. If you wish, you can join the discussion in the dedicated project forum thread or leave a comment in the space provided on this page.

UrbanToronto’s new data discovery service, UrbanToronto Pro, provides comprehensive information on construction projects in the greater Toronto area – from concept to completion. Additionally, our subscription newsletter, New Development Insider, will land in your inbox daily to help you keep track of projects throughout the planning process.