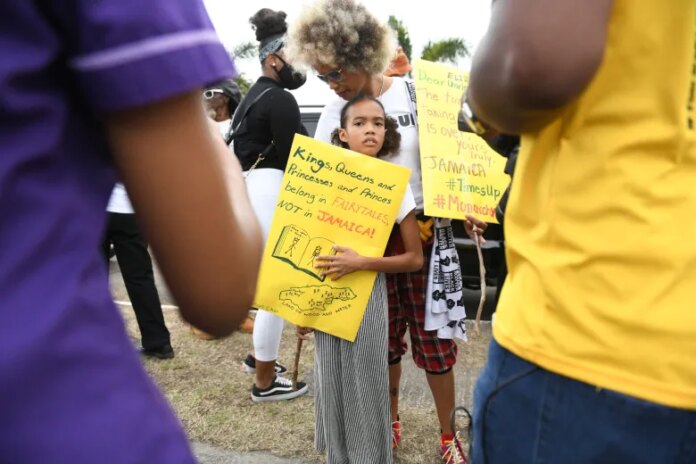 A recent royal tour has shone a spotlight on British colonial history and reopened the question of how long Commonwealth countries – including Canada – will have a monarch as head of state.

On the week-long tour, which ended last weekend, Prince William and Kate, Duchess of Cambridge visited Belize, Jamaica and the Bahamas in a bid to cement ties between Britain and those countries.

Instead, the trip drew protests and public demands for redress for slavery, and brought unexpected news from Jamaican Prime Minister Andrew Holness that his country intends to become fully independent.

That would make Jamaica the second Caribbean country to sever ties with Queen Elizabeth in recent years – after Barbados, which did so in 2021.

People demanding reparations for slavery protest outside the entrance of Britain’s High Commission during the visit of Prince William and Kate to Kingston, Jamaica last week. (Ricardo Makyn/AFP/Getty Images)

But more countries in the region seem to be considering the possibility.

Gaston Browne, the prime minister of Antigua and Barbuda, told the Jamaica Gleaner newspaper last week that he believed “every country within the Commonwealth of the Caribbean is aspiring to become a republic”.

Questions about the future of the monarchy are also on the minds of many Canadians – including those who already believe it’s time to break new ground.

“Jamaica and Barbados are ahead of Canada,” tweeted Kulpreet Singh, responding to the headline-making news from Jamaica from Vancouver.

“Come on Canada. Leave the monarchy behind.”

Selwyn Pieters, a Toronto lawyer and civil rights activist, said he sees no reason for the monarchy to remain in Canada.

“[Canada] doesn’t need a monarchy to oversee it,” he said in a phone interview last week.

The visit of the Royals has sparked protests in the country

The visit of the royal family to Jamaica this week is sparking protests in the country and discontent here in Canada among members of the Jamaican diaspora in Manitoba. 2:21

A recent poll by Vancouver-based Research Co. suggests many Canadians would agree.

Just under half of those polled wanted an elected head of state, according to the online poll of 1,000 adults conducted over three days in February.

Mario Canseco, the president of Research Co., said that number — now “a hair off 50 percent” — has risen in surveys he’s conducted in recent years.

“That’s the highest value we’ve ever had,” Canseco said, referring to his previous polls. 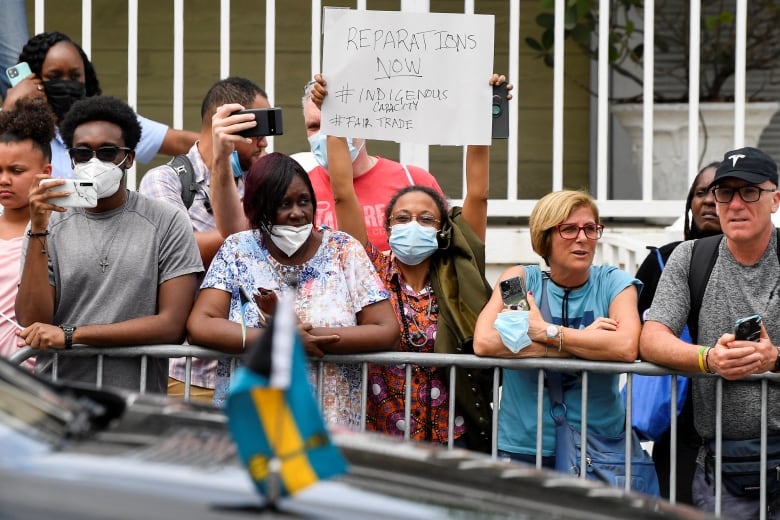 A Canadian Heritage spokesman told CBC News that “The Crown of Canada contributes to a sense of unity, stability and pride among Canadians. As a constitutional monarch, the Queen is Canada’s head of state and an integral part of Canada’s system of government.”

The spokesman went on to say that “no changes to the Crown’s role in Canada are being considered”.

But Ashok Charles, the executive director of Republic Now, a group campaigning for Canada to become a republic, said he believes that day is coming.

“I find it appalling that in the 21st century we’re clinging to what’s left of the monarchy,” Charles said.

Pandemic may be a factor

Canseco said there have been fewer royal visits during the pandemic and he believes this is a factor in what is reflected in the polls.

“You always find an opportunity to say that the monarchy was popular because there are a lot of people lining up to shake hands with them,” he said.

“But due to COVID and the lack of travel, they haven’t been able to make that emotional connection to the monarchy. And I think that’s partly responsible for the drop in numbers as well.”

There were also fewer public appearances.

On Tuesday, the Queen made her first major public appearance in five months at a funeral service for her husband Prince Philip. She missed a Commonwealth Day service at Westminster Abbey earlier this month while still recovering from COVID-19.

It would have been her first personal public engagement since her medical team advised her to rest after being hospitalized for unknown reasons in October. 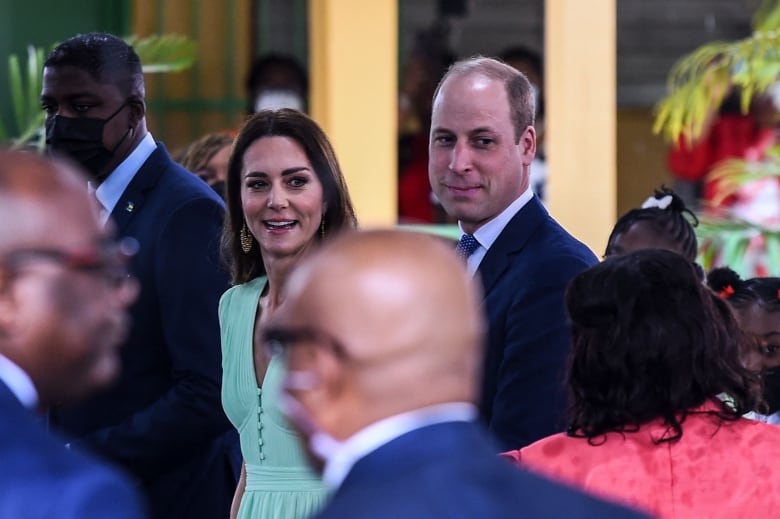 Prince William and Kate attend an event at an elementary school in Nassau last Friday – the penultimate day of a tour that also saw the couple visit Belize and Jamaica before the final leg of their tour in the Bahamas. (Toby Melville/Getty Images)

There are those in Canada who believe that moving away from the current system is not the solution.

Rob Wolvin, who lives in Toronto, said he believes a constitutional monarchy offers stability, which is one of its advantages as a system. But that doesn’t mean it has to remain static.

“We must allow our system to be tweaked,” Wolvin said, adding that he believes a transition to a republic does not guarantee a stronger or better democracy.

A story not so far away

While in Jamaica, Prince William spoke of the “deep sadness” he felt at the legacy of the transatlantic slave trade.

The second in line to the throne said “slavery was abhorrent and should never have happened,” though his remarks fell short of an apology.

In a speech to Jamaicans, Prince William expressed “deep sadness” at Britain’s role in the slave trade but did not apologize. 2:02

His words were closely watched by many people, including in Canada.

In Winnipeg, O’Neil Reece previously told CBC News he believes the royal visit to Jamaica made people even more upset.

“If there was an excuse, I really think it would definitely allow us to see her in a different light, basically,” said Reece, who frequently travels to Jamaica to visit his family.

“Of course you can’t change the past, but I think this generation will be the change.”

In Toronto, Pieters said he and others were still “processing and pondering” what the prince had to say about the painful history of transatlantic slavery.

Singh said he viewed an apology as “the bare minimum” of what was necessary.

“When we talk about Prince William’s ancestry, it’s not that far off that he can just say … that was something in our ancient history,” Singh said.

“It wasn’t that – it was in the 17th and 18th centuries. And so he has benefited from the legacy of that slavery.”

If Canada were to seek secession from the monarchy, that would involve amending the constitution to replace the queen as head of state. To do so, it would have to enact Article 41(a) of the 1982 Constitution Act, which requires a majority approval of “the Senate and House of Commons and the Legislative Assembly of each province”.

“It’s not going to be that easy, but it might be worth investigating if we continue to see this climb the charts,” said Canseco, who intends to follow the issue further in polls.

As difficult as that process is, Republic Now’s Charles said he believes it is an “inevitable” move for Canada and hopes the current moment can help inspire a desire for change. 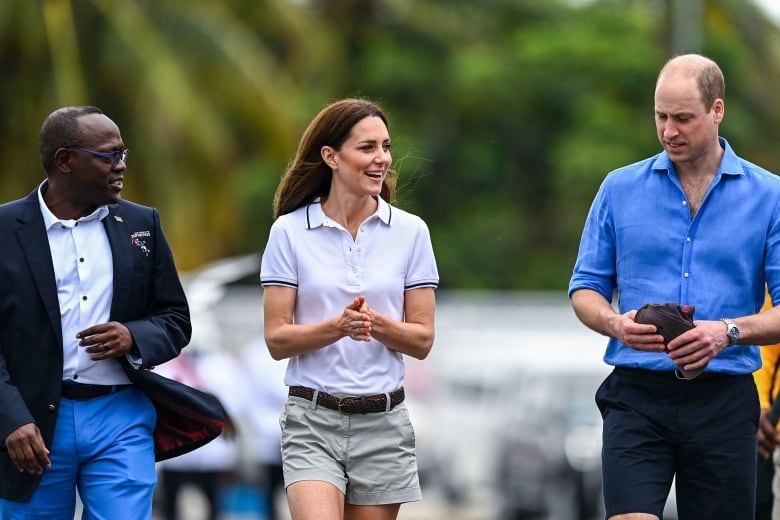 “We need to be more committed to facilitating change,” he said.

Singh said he doesn’t expect that kind of change to happen in the short term, in part because of the extent to which Canada is enmeshed in its colonial traditions.

“I feel like we’re still lagging behind in breaking free from these shackles,” said Singh, whose ancestors were expelled from western Punjab by the British Empire.