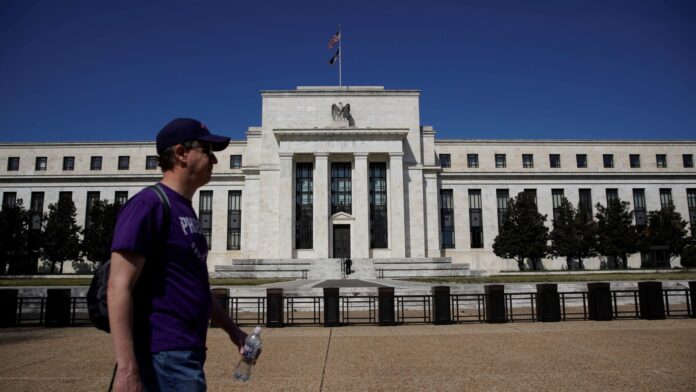 The Federal Reserve hiked interest rates by half a point at the end of its two-day meeting on Wednesday, marking the benchmark’s biggest rise in more than 20 years.

“The Federal Reserve is behind the curve,” said Greg McBride, chief financial analyst at Bankrate.com. “They need to raise interest rates big — and in a hurry.”

What the Federal Funds Rate means to you

The federal funds rate, set by the central bank, is the rate at which banks lend and borrow money from each other overnight. While that’s not the rate consumers are paying, the Fed’s moves are still impacting the lending and savings rates they see every day.

“Rising interest rates means it costs more to borrow, and eventually there is more to save,” McBride said.

“This points to the steps households should be taking to stabilize their finances — paying down debt, especially costly credit card and other adjustable-rate debt, and boosting emergency savings,” he added. “Both of these will allow you to better weather rising interest rates and whatever may be next economically.”

Since most credit cards have a variable interest rate, there’s a direct link to the Fed’s benchmark, so expect your APR to increase within a billing cycle or two.

“When it comes to increasing the APR on credit cards, banks are wasting no time,” said Matt Schulz, chief credit analyst at LendingTree.

Credit card rates are currently just over 16%, well above almost any other consumer loan, and could climb to 18.5% by the end of the year — which would be an all-time record, according to Ted Rossman, a leading industry analyst at CreditCards.com.

If the APR on your credit card jumps to 18.5% in 2022, that’ll cost you an additional $885 in interest expense over the life of the loan, assuming you’ve made minimum payments on the average balance of $5,525, Rossman calculated.

If you have a balance, try calling your card issuer to ask for a lower interest rate, consolidate and pay off high-yield credit cards with a lower-yielding home equity loan or personal loan, or switch to an interest-free credit card with balance transfer.

“Now is the time for those with credit card debt to focus on reducing it,” Schulz said. “This debt will only get more expensive.”

Adjustable rate mortgages and home equity lines of credit are also linked to the prime rate. Most ARMs adjust once a year, but a HELOC adjusts instantly.

However, since interest rates on longer-term 15- and 30-year mortgages are fixed and linked to government bond yields and the broader economy, most homeowners will not be immediately affected by a rate hike.

That rate hike is already burned into mortgage rates, according to Jacob Channel, senior economic analyst at LendingTree.

The average interest rate on a 30-year fixed-rate mortgage hit 5.55% this week, the highest since 2009, and rose more than two full percentage points from 3.11% at the end of December.

By the end of 2022, “something closer to 6% isn’t entirely out of the question,” Channel said. That means anyone buying a new home will pay a lot more on their next home loan.

Even though car loans are locked in, the payments are getting bigger because the prices of all cars are going up. So if you’re planning on financing a new car, you’ll be shelling out more in the coming months.

Federal student loan rates are also fixed, so most borrowers are not immediately affected by a rate hike. However, if you have a personal loan, those loans can be fixed or have a floating rate tied to Libor, Prime, or T-Bill interest rates — meaning borrowers are likely to pay more interest when the Fed hiked rates, although how much more will vary by benchmark.

As such, this is a particularly good time to identify your outstanding loans and see if refinancing makes sense.

Savers need to look around to take advantage

While the Fed has no direct influence on deposit rates, they tend to correlate with changes in the target federal funds rate. As a result, the savings account rate at some of the largest retail banks is hovering near bottom, currently averaging just 0.06%.

“Mean national deposit account rates, dominated by brick-and-mortar banks, have been slow to rise and are expected to remain so,” said Ken Tumin, founder and editor of DepositAccounts.com.

Interest on high-yield certificates of deposit is over 1% – even better than a high-yield savings account.

If you have $10,000 in a regular savings account and earn 0.06%, you’ll only earn $6 in interest in a year. With an average online savings account paying 0.5%, you could make $50, according to Tumin, while a five-year CD could bring in twice that.

However, since the inflation rate is now higher than any of these rates, any savings lose purchasing power over time. Still, choosing the right account type makes a big difference, advises Yiming Ma, an assistant professor of finance at Columbia University Business School.

Make sure the money you save has a better return thanks to this period of rising interest rates, she said. “The worst thing would be if your borrowing costs go up but you don’t benefit from the higher savings rate.”