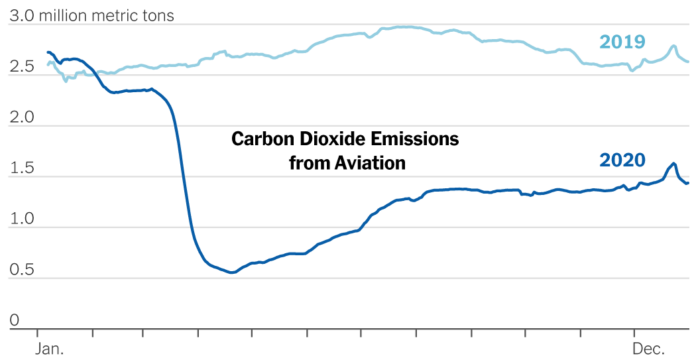 Numbers alone cannot capture the extent of the losses that have occurred as a result of the coronavirus pandemic. Datasets are crude tools for plumbing the depth of human suffering or the immensity of our collective grief.

However, numbers can help us grasp the magnitude of certain losses – especially in the travel industry, which saw an amazing collapse in 2020.

It is estimated that international arrivals worldwide have fallen to 381 million in 2020, from 1.461 billion in 2019 – a decrease of 74 percent. In countries whose economies are heavily dependent on tourism, the steep decline in visitor numbers was and is devastating.

According to recent figures from the United Nations World Tourism Organization, the decline in international travel in 2020 resulted in an estimated loss of $ 1.3 trillion in global export revenue. As the agency notes, this figure is more than eleven times the loss made in 2009 as a result of the global economic crisis.

The charts below, discussing changes in international arrivals, emissions, air travel, cruise lines, and car trips, provide a comprehensive view of the impact of the coronavirus pandemic on the travel industry and beyond.

Before the pandemic, tourism was responsible for one in ten jobs worldwide. However, travel plays an even bigger role in the local economy in many places.

Consider the Maldives, where international tourism has accounted for around two-thirds of the country’s GDP in recent years, when you factor in direct and indirect contributions.

When lockdowns broke out around the world, international arrivals in the Maldives declined. From April to September 2020, they were 97 percent lower than in the same period in 2019. Throughout 2020, arrivals were down more than 67 percent from 2019, while the government, keen to promote tourism and mitigate losses, lured travelers with marketing campaigns and even courted influencers with paid junkets.)

Similar developments were seen in countries like Macau, Aruba and the Bahamas: standstills in February and March, followed by incremental increases over the course of the year.

The economic impact of travel-related declines has been staggering. In Macau, for example, GDP fell by more than 50 percent in 2020.

And the effects could be long-lasting. In some areas, travel expenses are not expected to return to pre-pandemic levels by 2024.

The pandemic has caused an uproar in commercial aviation. One way to visualize the impact of lockdowns on air traffic is to consider the number of passengers that are checked daily at the Transportation Security Administration checkpoints.

Traveler screenings fell in March before bottoming out on April 14 when 87,534 passengers were screened – a 96 percent decrease from the same date in 2019.

The numbers have risen relatively steadily since then, although the screening numbers are still less than half of last year.

According to the International Air Transport Association, an airline trading group, global passenger traffic decreased 65.9 percent in 2020 compared to 2019, the largest decrease in aviation history year-over-year.

Another way to visualize the decline in air traffic over the past year is to consider the amount of carbon dioxide (CO2) emitted by airplanes around the world.

According to information from Carbon Monitor, an international initiative that provides estimates of daily CO2 emissions, global emissions from aviation fell by almost 50 percent to around 500 million tons of CO2 last year, after around 1 billion tons in 2019. (These numbers are expected to rebound, though the timing will largely depend on how long the absence of business and international travel.)

Overall, CO2 emissions from fossil fuels decreased by 2.6 billion tons in 2020, a 7 percent reduction compared to 2019, largely due to declining transports.

In the first few months of the coronavirus pandemic, few industries played such a central and public role as the major cruise lines – starting with the outbreak on board the Diamond Princess.

In an industry scathing reprimand published in July, the Centers for Disease Control and Prevention accused cruise companies of spreading the virus widespread, citing 99 outbreaks aboard 123 cruise lines in US waters alone.

While exact passenger data for 2020 is not yet available, the publicly disclosed revenues – including ticket sales and onboard purchases – from three of the largest cruise lines offer a dramatic representation: strong revenues in the first few months of 2020 followed by a sharp decline.

The outlook for the first few months of 2021 remains bleak: Currently, most cruise companies have canceled all trips until May or June.

International and domestic air traffic was significantly restricted by the pandemic. But how was the car ride affected?

One way to measure the change is to look at the Daily Travel Index created by Arrivalist, a company that uses mobile location data to measure consumer road trips over 50 miles or more in all 50 US states.

The numbers tell the story of a recovery slightly stronger than that of air travel: a sharp drop in March and April when state and local restrictions were put in place, followed by a gradual surge to around 80 percent of 2019 levels.

Another way to consider car trips in 2020 – and domestic travel in the US in a broader sense – is to check the visitor numbers for the American national parks.

Overall, the number of visitors to national parks fell by 28 percent in 2020 – to 237 million visitors compared to 327.5 million in 2019, mainly due to temporary park closings and pandemic-related capacity restrictions.

The caveat, however, is that several parks saw record visitor numbers in the second half of the year as a wave of travel-deprived tourists sought safe and responsible forms of recreation.

Look at the numbers for recreational visits to Yellowstone National Park. After a closure in April, monthly visitor numbers to the park rose quickly above 2019 levels. September and October 2020 were both the busiest months, with October numbers beating the previous monthly record by 43 percent.

Some national parks near cities served as convenient recreational areas during the pandemic. In Cuyahoga Valley National Park, the numbers for 2020 were above the numbers for 2019 from March to December. In the Great Smoky Mountains National Park, numbers rose sharply after a 46-day closure in spring and partial closings through August. Between June and December, the park saw an additional 1 million visits compared to the same period in 2019.