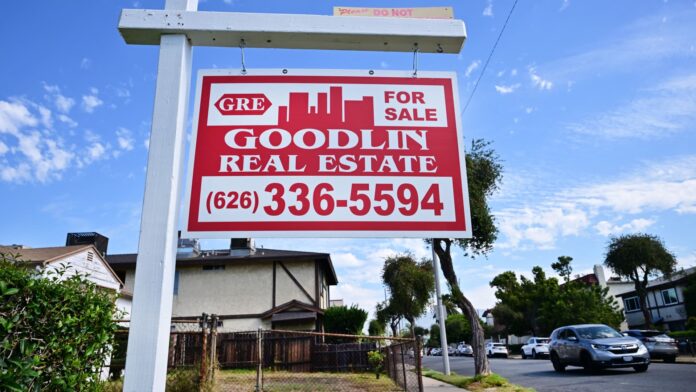 A For Sale sign is posted in front of a property in Monterey Park, California on August 16, 2022.

Mortgage rates fell slightly last week, but not enough to spur any sort of recovery in consumer demand for home loans.

Total mortgage applications fell 2% from the previous week, according to the Mortgage Bankers Association’s seasonally adjusted index. Demand is at its lowest level since 2000. It hit a similar low in July.

Applications for a home-buy mortgage fell 1% on the week and were 18% lower than the same week a year ago. Potential homebuyers are struggling not only with higher interest rates but also with inflation in the overall economy and fears that home values ​​will start to fall.

While mortgage rates are down slightly from their recent highs, there are few borrowers who can benefit from refinancing. Those applications fell 5% on the week and were 82% lower than the same week a year ago.

Mortgage rates weren’t moving much earlier this week, but new economic data expected on Wednesday could change that. The Federal Reserve is scheduled to release minutes from its latest meeting and provide more insight into its thinking, but investors are likely more interested in the monthly retail sales report, also due out on Wednesday.

“This one report wouldn’t be enough to change the narrative, but if it comes in significantly stronger or weaker than expected, rates could start moving well before the Fed minutes are released at 2:00 p.m. ET,” said Matthew Graham , Chief Operating Officer of Mortgage News Daily.