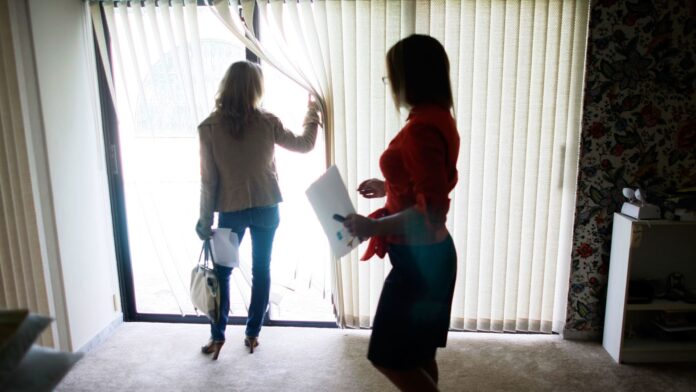 A real estate agent shows a home in Miami to a potential buyer.

Mortgage demand continues to weaken and is still at a 22-year low, but weekly figures suggested first-time buyers could be slowly returning.

According to the Mortgage Bankers Association’s seasonally adjusted index, homebuyer mortgage applications fell 1% last week from the previous week. Volume was 21% lower than the same week a year ago. However, demand for loans with lower down payments increased.

“Buying results over the last week have been mixed, with traditional applications down 2% and state applications up 4%, possibly a sign of more first-time homebuyers,” said Joel Kan, an MBA economist.

He also noted that the average loan size to buy continues to trend down as home buying weakens at the top end of the market.

Mortgage rates rose last week for all types of loans. The average contract rate for 30-year fixed-rate mortgages with matching loan balances ($647,200 or less) increased from 5.45% to 5.65%, with points going from 0.57 (including the setup fee) to 0.68 for loans with a Discount of 20% increased payment.

As a result of the sharp rise in interest rates, demand for loan refinancing fell by 3% this week and was 83% lower than in the same week a year ago.

Borrowers are also turning away from variable rate loans, which no longer offer the bargains they enjoyed just a few months ago.

“The spread between conforming fixed rate loans and ARM loans narrowed to 84 basis points from over 100 basis points the previous week,” Kan said. “This move made fixed-rate loans relatively more attractive than ARMs, causing ARM exposure to continue falling from the highs seen earlier this year.”

Mortgage rates rose even higher earlier this week as the stock market sold off on renewed recession fears. Investors await expected dovish sentiment from the Federal Reserve at a meeting later this week in Jackson Hole, Wyoming.