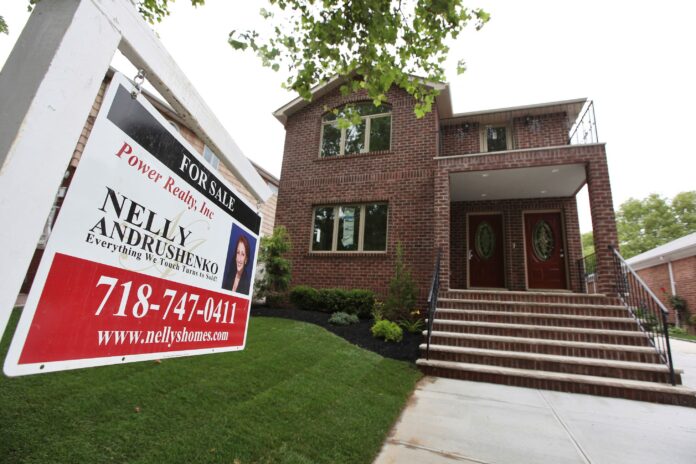 A “For Sale” sign is seen outside a home in New York.

The war-related fall in US mortgage rates was short-lived. Interest rates rose again this week to their highest level in almost two years.

According to Mortgage News Daily, the average interest rate on the popular 30-year fixed-rate mortgage hit 4.19% and then dropped to 3.90% as the Russian invasion of Ukraine began.

The crisis shook global financial markets and sent investors to the relative safety of the bond market. Mortgage rates are loosely tracking the 10-year Treasury yield.

But when fears of inflation and expected policy changes from the Federal Reserve overruled everything else, bonds were sold and interest rates rose. The average of the 30-year fixed-rate bond now stands at 4.28%, a full percentage point higher than a year ago.

“Longer term, we expect interest rates to continue to rise as inflation widens and tightening increasingly impacts many segments of the economy. However, uncertainty about the war in Ukraine is driving interest rate volatility, which is likely to persist in the near term,” said Sam Khater, chief economist at Freddie Mac, in a news release on Thursday.

That’s not good news for homebuyers who are faced with the tightest and most expensive market in history.

But there is good news. The inventory of actively listed homes, which is near a record low, posted its fifth straight week of improvement last week.

Buyer competition is intensifying. An increasing number of homes are again selling above list price, reaching the frenzied levels of last summer after a brief respite last fall and this winter.

While mortgage rates are expected to continue to rise, they may be doing so more slowly now.

“The silver lining is that the bond market has probably already done a lot of the dirty work to get to the next big top in interest rates/yields,” said Matthew Graham, chief operating officer at Mortgage News Daily. “It’s worth noting that the current rate hike is less than half a percent away from being as big as the 2016-2018 rate hike — the biggest we’ve had since the 1990s.”