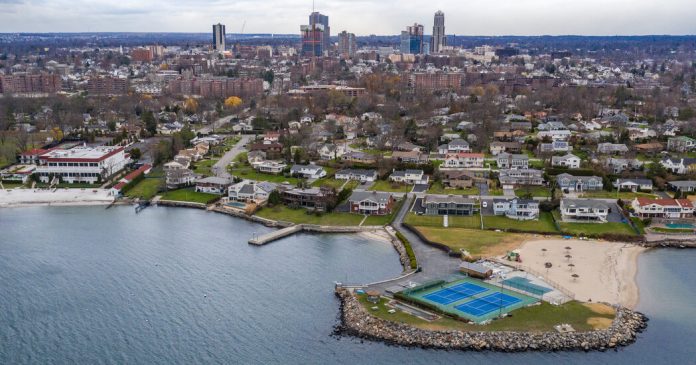 Wealthy and middle-class sections often rub elbows, though the more expensive areas are sometimes fenced off like Premium Point, where large 19th-century homes are some of the most expensive properties in town. Next door, in the Pryer Manor overgrown with real estate, inlets from Long Island Sound flow past windswept hills and are reminiscent of the British moors.

But also on the water is Isle of Sans Souci, a development from the 1960s in a home owners association with ranch-style houses on 4 acres of land where prices are more accessible, at least outside the water.

French place names are not uncommon in a city founded by Huguenots, French Protestants fleeing Catholic persecution. While fleur-de-lis emblems adorn the city and the Eglise Baptiste d’Expression Francaise holds services in French, Spanish is the most widely spoken foreign language today. According to recent census figures, around 30 percent of the population identify as Hispanic American.

“Ritzy places are separated for no rhyme or reason, but each area has a good socioeconomic mix,” said Samantha DiPalo, 40, who grew up on the bourgeois South Side and now lives in Stephenson Park in the 1920s, which she added in 2019 bought for $ 520,000.

What has fascinated longtime locals is the attention paid to the city’s downtown area. Five years after a 279-acre rededication made it easy to build high-rise buildings, several new ones – all rental properties and most with some affordable units – are completed or nearby.

Now open is 360 Huguenot, a 28-story tower with 280 units, from studios to two bedrooms. Current projects include the first phase of 14 LeCount Place, a 27-story rental property with 380 units, and The Huguenot, a six-story building with 60 units.

Closer to the U-Bahn-Nord-Station is the red-brick NewRo Studios building, which opened in September and in which some of the 73 live work units are reserved for working artists. A bit rare condos are starting to shoulder; One of them is Watermark Pointe, a complex of nine buildings and 72 units in a former beach club.