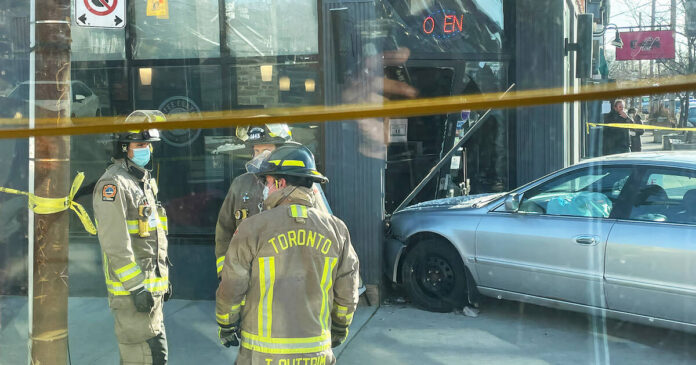 For many of us, the importance of our morning dose of caffeine is no joke and can mean the difference between a semi-productive person and a completely dysfunctional one.

A Toronto driver may very well have skipped his morning cup of coffee Monday, as evidenced by the fact that he lost control of his vehicle and sped into nothing but a local coffee shop.

The Toronto Fire received a call around 8 a.m. from someone trapped in a vehicle near Jane and Annette Streets and arrived at the scene to find a two-car snafu with an Acura stuck through the front window of one Coffee Culture location at 399 Jane.

He was just looking for the drive-through window.

The store appeared to be open at the time based on images of the incident, although staff were unavailable for comment.

Two people were taken to hospital, although authorities tell blogTO that no one was actually trapped and that no one sustained any major injuries.

Experts checked the building’s structural integrity and concluded that there are no concerns, although the store will need some serious repairs to its front door and entrance.

The corner was closed and the mess cleared up within hours, although police stayed on site until early afternoon.

@jsquaredink
Do you recognize the corner?
Jane and Annette today
(Image from reddit) pic.twitter.com/JDlLV1pVwt

While many have joked online about how badly this particular motorist must have been craving a latte, the actual cause of the accident has yet to be confirmed.

The accident is oddly reminiscent of another recent one, when a coffee shop joked it was not offering a drive-through service after a Tesla crashed through its storefront.