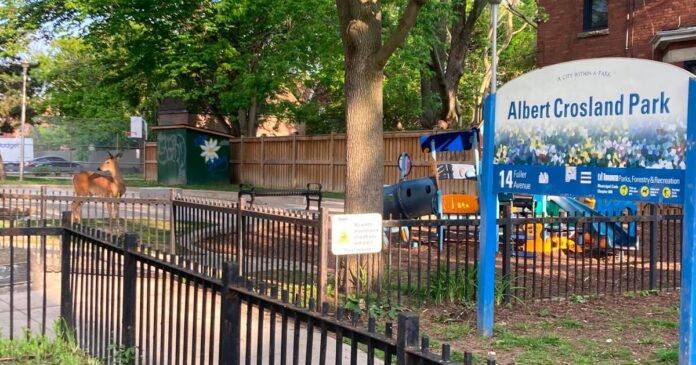 In the middle of the city, a deer was sighted in a playground in the early hours of May 24 – a rather unexpected wake-up call for anyone out on their morning walk.

The deer walked right around Albert Crosland Park near Queen St. and Fuller Ave. hung around Parkdale and hung around the park for a while until running down Queen St. West and escaping behind a nearby Shoppers Drug Mart.

The key witness behind this event, Nicole Dowzansky, happens to work in ecological restoration and invasive control in the city. She noted that while it’s strange to see a deer in such a small park in a heavily urbanized area, deer can be spotted in and around the city all the time.

“Deer are really good at adapting to the urban lifestyle. It’s not uncommon to see deer quite often, just as we see coyotes all the time in this town,” Dowzansky said.

“A small trading floor behind Queen Street West is unusual [though]. I was quite surprised to see him there at the time.”

Dowzansky says the deer was a young male white-tailed deer with tiny antlers that was probably born as recently as last spring. She attempted to call the city to report the deer sighting but explained that they didn’t seem concerned it was there and no one is getting out unless an animal is injured.

People who passed by even tried to keep the deer in the park so it wouldn’t walk on Queen, others even took out parts of their fence so it could find its way through their backyards instead of walking the city streets.

Dowzansky emphasized the need to keep wildlife corners open in the city so animals like deer have a chance to roam freely in urban areas rather than being confined to small parks.

“Keeping these green spaces green and keeping the wildlife corridors open is very, very important. The poor [deer] was scared and injured himself trying to break free, basically cornered in an alley,” Dowzansky explained.

“You know, we’re not the only critters that live here.”