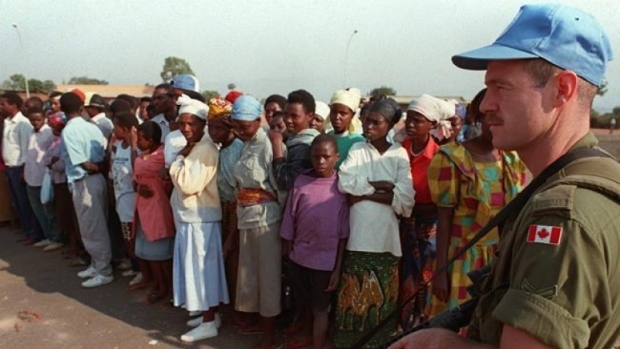 OTTAWA – When the now retired Major General Guy Tousignant handed over command of the United Nations peacekeeping mission in Rwanda in 1995, Canada has been involved in virtually every UN mission in the past four decades.

But after the scandal in Somalia in which Canadian soldiers tortured and killed a teenager, the frustrations and failures of the United Nations efforts in Bosnia and Croatia, and the horrors of Rwanda, Canada began to pull away from peacekeeping.

Today Canada has around 40 peacekeepers on the ground. That’s a fraction of the 1,200 Canadian blue helmets and blue berets deployed when Tousignant left Rwanda.

That figure is also roughly a third of the number when the federal liberals came to power five years ago – despite repeated promises by Prime Minister Justin Trudeau and his Liberal government that Canada should do more.

That the decline has continued is frustrating for some who worked with the Liberal government in the early years. They told the Canadian press that they supported the plan to return to peacekeeping and they believed that would happen.

Some accused Donald Trump’s election as US president of abandoning the Liberals’ plans. Others pointed out that the military was dragging its feet or that high-ranking liberals were not interested.

Most agree, to varying degrees, that another factor played a role: the potential electoral costs of large-scale Canadian peacekeeping operations overseas appear to outweigh the benefits.

“I think the Liberal government has realized that the votes are likely to be low,” says retired Lieutenant General and former Canadian Army commander Andrew Leslie, who advised Trudeau before he was elected Liberal MP in 2015.

“The hallmark of this current government is its relentless and ruthless focus on how to get re-elected. And promises have been made and not kept.”

Leslie, who did not run for re-election last year, made it clear that other governments have made similar calculations in the past.

The Liberal government insists that it honor its commitments and that Canada make a real difference at the United Nations.

It points to the year-long deployment of helicopters to Mali, which ended in August 2019, and the occasional deployment of a transport plane to Uganda. Canada is also leading the way in efforts to increase the number of women in peacekeeping missions and to prevent the use of child soldiers in conflict.

“UN peacekeeping operations are an important tool for maintaining international peace and stability – an important pillar of the multilateral system,” said John Babcock, spokesman for Global Affairs Canada, in a statement on Friday.

Roland Paris, a former foreign affairs adviser to Trudeau, said the government has “landed in a place where it can say it is meeting its peacekeeping commitments at a truly minimal cost”.

The transport plane, which is occasionally dispatched to Uganda to carry troops and equipment to various UN missions in Africa, is useful, Paris said, but “by itself it is a minimal obligation,” as is the contribution to Mali.

Paris argues that Canada is leading the way in initiatives aimed at making peacekeeping more effective. This includes training troops from Africa to carry out such operations, measures to increase the number of female peacekeepers on site, and dealing with child soldiers.

Others like Leslie and Jocelyn Coulon, a peacekeeping expert from the Universite de Montreal who also advised the Trudeau administration, question the real impact.

Everyone is saying what is really needed is more Canadians on the ground – something Trudeau was calling for ahead of the October 2015 election that brought the Liberals to power.

A survey conducted by Nanos Research in August on behalf of Canada’s Defense and Security Network found that three out of four respondents said they support peacekeeping. However, older respondents also found more support than a primary target for Liberals’ electoral efforts: young Canadians.

Jean-Christophe Boucher, a professor at the University of Calgary, suggested how younger generations saw the limits of intervention in Iraq, Afghanistan, and elsewhere in a paper analyzing the findings for the Canadian Global Affairs Institute.

The government committed itself in August 2016 to sending up to 600 soldiers and 150 police officers on UN missions, then delayed for years before sending helicopters to Mali after repeated requests from the UN and allies such as France and Germany.

The Liberals also promised in November 2017 that they would provide the United Nations with a 200-strong rapid reaction force. It hasn’t happened three years later.

“I see it as extreme risk sensitivity,” said Paris.

“Each country determines its level of comfort and engagement, and Canada has drawn a line in a particular place. And it makes a significant contribution to the peacekeeping of the United Nations, but less than some had hoped.”

In the meantime, the United Nations is trying to get along with what the Member States have to offer. The British began a three-year deployment of 300 troops to Mali this month, but the mission there still consists of hundreds of troops and police officers.

Rwanda has gone down in many books as a failure for the UN and peacekeeping in general. But Professor Walter Dorn of the Royal Military College, one of Canada’s leading peacekeeping experts, doesn’t see it that way.

He was referring to retired Major General Romeo Dallaire’s assessment that the UN forces under his command saved 20,000 lives during the genocide in Rwanda.

“It shows that being on the ground can make a difference.”

This Canadian press report was first published on December 13, 2020.