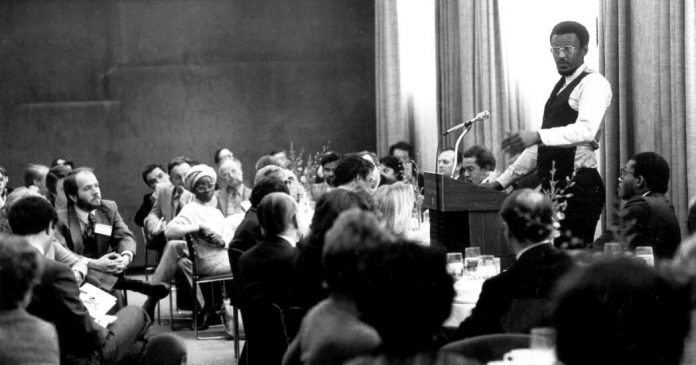 “My father left my mother when I was 2 or 3 years old,” he said in a 2006 interview. Walter and his sister Catherine were raised by their mother on a public housing project in north Philadelphia.

In his youth, Mr. Williams was an indifferent student, but he was always anxious to make money. Among other things, he picked blueberries, shoveled snow, washed dishes and shone shoes at the age of 10. At the age of 13 he found an easy job for a woman’s hat manufacturer. There he learned how to use electric sewing machines, only to be fired when a seamstress complained to authorities that his employment violated child labor laws.

An after-school job at a small brokerage firm led him in his mid twenties to buy a few shares of Pepsi-Cola stock, the price of which he tracked on the Philadelphia Bulletin financial pages.

After graduating from high school, Mr. Williams made a brief visit to Los Angeles with his father, where he enrolled at Los Angeles City College. But after an argument with his father, he moved back to Philadelphia and drove a taxi to pay for the night hours at Temple University. Through another driver, he met his future wife Conchetta Taylor, known as Connie.

Mr. Williams was later drafted into the army. At Fort Stewart, Georgia, he later recalled, he found that President Harry S. Truman’s 1948 order to ban discrimination in the armed forces had done nothing to keep black soldiers from doing the slightest job .

Mr. Williams turned out to be a rebellious soldier. Once, when ordered to paint a truck, he would paint everything, including mirrors and tires, then mockingly explain his actions to his superiors using what he called “my best stepin fetchit routine.” .

Mr. Williams was eventually ordered to Korea, but before he was shipped he and Mrs. Taylor married.

His wife died in 2007. In addition to their daughter, Mr. Williams survived a grandson.