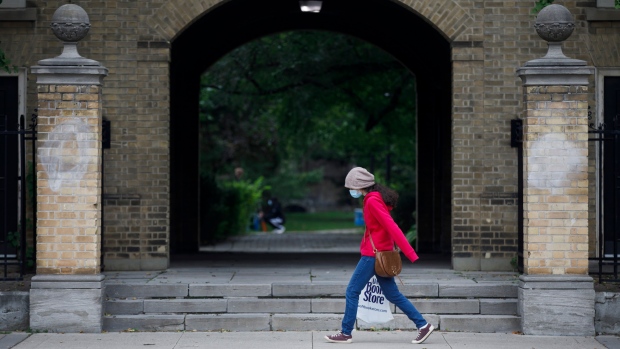 As the war in Ukraine rages on, the Ukrainian Canadian Students Union (SUSK) says international students from that country are being abandoned and have little idea how to support themselves.

“Many of us still have families who are back in Ukraine and even if they make it like my mother and brothers are in Poland now, they can no longer send us money for our tuition fees,” he said Oleksandra Shelduko, a public relations student at Humber College in Toronto.

Shelduko came to Canada for in-person classes two months ago after spending a year and a half in Boryslaw in western Ukraine for online classes. When the war started, she and many other Ukrainian students asked Humber College for financial support.

According to Shelduko, several of her friends who live at the Humber College residence have already run out of money for their meal plans.

The school, in partnership with the Ukrainian student club, has responded by issuing meal vouchers and providing mental health support. Humber says on its website that it will accept deferred tuition payments for the current and next semester.

However, not all universities across the country are responding in the same way.

“What we see are general statements from universities that they have published on their websites, social media pages and emails to student associations,” said Danya Pankiw, president of the Ukrainian Canadian Students Union (SUSK).

“But (they) don’t seem to take the specific issue into account.”

Pankiv said that SUSK is hearing from Ukrainian students across the country that universities are unwilling to offer them special academic and financial accommodation and that they evaluate each one on a case-by-case basis.

Matthew Ramsey, director of university affairs at the University of British Columbia, said that while there is no blanket policy on accepting Ukrainian students, he wants to make it clear that any students who need support will receive it.

“It is recognized that the events unfolding in Ukraine are particularly stressful, unnerving, worrying and damaging for Ukrainian students,” he said.

“So the university and I have made it very clear that this support is available. What students need to do is reach out… say, “Hey, I have a problem. I need help.’ And then the university can help.”

Pankiw said many universities are moving forward without a unified and holistic policy with professors and students not knowing how to respond to the problem.

According to SUSK, students are hearing mixed responses from individual professors, with some willing to offer generous academic accommodations like rescheduling exams, but others saying it’s not fair to only accept Ukrainian students amid conflicts around the world.

“So it’s really like professors are making their own decision about this, while universities are making a general statement,” she said.

The University of Toronto Students’ Club of Ukraine (U of T) published a post on its Instagram page on February 28 about a professor who allegedly denied a student’s request for an extension.

According to the post on the Ukrainian student club’s Instagram page, the professor replied: “We must be consistent, transparent and fair to all students. As you may know, there are other armed conflicts and humanitarian disasters around the world that directly affect students and their families. If we grant students an extension due to the situation in Ukraine, we have to consider other students.”

The post was later updated to note that the regular renewal policy had been increased from two days to seven days.

In a statement to CTVNews.ca, a U of T spokesman said: “The university is providing emergency subsistence assistance to students affected by the war in Ukraine and is also working with individual students on a case-by-case basis on the deferral of Tuition fees as required.”

The spokesperson did not elaborate on his policy on extensions and postponements of exam and filing deadlines.

A review of several university websites shows that most do not have specific policies to accommodate and support international students in their home countries during emergencies. Instead, they work on a case-by-case basis, assessing each student’s situation individually.

However, it is not the first time confusion has arisen over the policy.

During the height of the military coup in Myanmar, a York University student requested that the exam be rescheduled due to an impending nationwide communications blackout, but according to screenshots of an email exchange published on Reddit, the lecturer replied to the student, saying: “Even the internet caught COVID- 19 sick?”

The professor was eventually fired, and York University released a statement saying support will be available to all students in need of housing.

Pankiw said all universities should have a mandate to host diverse cultural groups dealing with humanitarian crises or wars around the world that affect them.

Several community groups or community partnership campaigns, such as the Pardesi Project at Sheridan College, have also highlighted the need for specific policies and support for international students.

“The important thing about universities and colleges is that you’re there to learn … and when something happens at home with your family and loved ones, your mind is clouded,” Pankiw said.

Shelduko fears that unless tuition is reduced or she cannot secure financial aid from the school, she will not be able to continue her education at Humber College.

For her, a tuition deferral only delays the problem rather than fixing it, as she no longer has access to funds to pay her tuition.

As an international student, federal law restricts her to working 20 hours a week, which she says is insufficient to pay her degree’s annual fee of $20,485, which is nearly three times the $7,160.76 fee for domestic students.

“I don’t want to quit after making it this far. It is a shame that we are in this situation because the war has affected us and our families. That’s not fair to us.”

are you in ukraine Do you have family in Ukraine? Are you or your family affected? E-mail dotcom@bellmedia.ca.