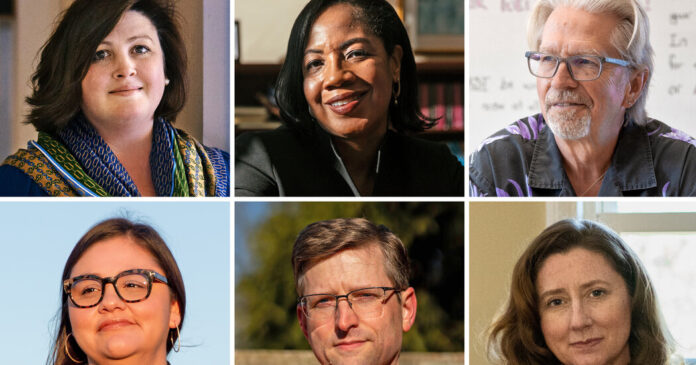 When the Department of Education announced a plan to fix many hellish problems with its Public Service Loan Forgiveness program, hundreds of thousands of beleaguered borrowers held their breath.

Since 2007, the program has promised hope for those who pledged to advance the public good. If they made 120 payments on time, their loans would be forgiven. During that time, their balances often grew because of the income-based payments the program required.

The devil was in the details, and the devil often won. Borrowers frequently shared their stories of yearslong bureaucratic struggles. The waiver program announced in October, however, promised to yank open some doors — borrowers could seek credit for categories of payments that were previously ineligible.

And over the last several weeks, the momentum turned: Exhaling borrowers are running into the light, debt-free. “I’m extremely thankful,” Katherine Ojeda Stewart, a public defender in Los Angeles, told me. “But the emotional capital you had to spend took a lot out of me.”

I spoke to six borrowers who, all told, have been freed from more than $800,000 in debt. Their stories chronicle the hope, the disappointment and finally the relief felt by so many.

In order to participate in the PSLF program, you needed to know that it existed in the first place — and many didn’t learn about it for years because the Education Department did a lousy job spreading the word about its potentially life-changing program.

Louisa Nuckolls, 50, was among the lucky ones. She was tipped off early by a defense lawyer who once had a job like hers. “It was around 2008, and he told me that there was this new program where if you work in government for 10 years, you could have your loans forgiven,” she said. “He said that he wished he would have stuck around the prosecutor’s office.”

Administrators in her office soon heard about it, too, and encouraged people to sign up. What, they figured, did everyone in the office have to lose by throwing in with the nascent program?

“They started sending emails around saying, ‘Hey, this is out there — we’re not sure how effective it’s going to be,'” Ms. Nuckolls said.

They were right to be dubious: Over the last few years, Ms. Nuckolls kept noticing inaccurate payment counts when she checked on her status. They were never in her favor.

“It was almost like the ball kept being moved,” she said.

Katherine Stewart, 39, was caught up in even more of the program’s many tripwires.

Fresh out of law school, Ms. Stewart was making so little that her income-driven repayment program meant she didn’t have to pay anything at all on her student loans. Just to be safe, though, she made small payments anyway: Sending in a little something would mean she’d definitely get credit, she figured, because there would be a record of payment.

Paradoxically, Ms. Stewart got in trouble for it. People like her often wouldn’t get credit for any month during which they had paid more than they were supposed to, stifling their progress toward the 120 payments they needed. Trying to get ahead caused them to stand still.

That wasn’t the only problem. Because she lived close to the scenes of wildfires in California, she was put into a kind of automatic emergency forbearance — and wasn’t getting credit toward forgiveness for the monthly payments she was still making. This happened twice.

On top of that, the entities managing her payments changed repeatedly, and she kept losing credit for payments made during the transition.

Dealing with the servicers was “nightmarish,” Ms. Stewart said.

“This was, like it was for everyone, a second job,” she said.

The program tested even Megan Harrington, who helps make policy — including around education issues — in the office of Senator Rob Portman, Republican of Ohio. When constituents got in touch about their own PSLF problems, she could offer a comforting voice and maybe some notes on possible regulatory or legal tweaks that were under consideration.

Ms. Harrington, 36, could also commiserate: Several years of her records disappeared after two former servicers went out of business, a problem that took more than a year to sort out. Her friends on Capitol Hill — Democrats and Republicans alike — also had trouble navigating the system.

“People probably don’t realize that a lot of folks on the Hill were caught up in this, too,” she said.

The troubles made for some problematic messaging.

“People involved in public service, we go to work with a full heart and energy, to do jobs to help people, because we believe in what we do and that this is a calling,” Ms. Harrington said. “When you have a poorly administered program and it’s so frustrating to people, there’s real risk around whether people would even want to enter public service.”

But at its best — and someday it just might get there — the PSLF program attracts people who might not have considered public service at all.

“It’s been a privilege of a lifetime to work on behalf of the people of Ohio, to help Washington understand the concerns of everyday citizens and help people understand what the federal government can do to help them — or at least not hurt them,” Ms .Harrington said. “It’s been rewarding. But it hasn’t been easy.”

David Negaard dedicated himself to service right away, joining the Navy after high school. After six years and a stint on a guided missile cruiser, he left the Navy and worked as a quality control engineer for several years before going to college.

“I either wanted to be a teacher or a youth minister,” Mr Negaard, 62, said. “Teaching was where, you might call it, the money was.”

Few teachers get rich, so let him explain what he was thinking back in 1996.

“A degree used to be a guarantee of sufficient income to retire any debt in short order,” said Mr. Negaard, who added a master’s degree in 2010. “But that is no longer true. Many degreed people are unable to earn the kind of money proportional to the cost of education that used to be routine. And that includes me.”

Indeed, the combination of loans was too much at some points, and he took hardship deferments when it became overwhelming.

After 23 years in the classroom, Mr. Negaard figures he would have made a lot more money if he had remained an electronics professional with a high school diploma. So he makes no apologies for availing himself of the PSLF program.

“I understand that I incurred the debt, and I’m grateful that there are opportunities for someone like me, who chooses to serve the public good, to discharge debt that had become burdensome,” he said. “Not because I had done something wrong, but because the world had changed right out from under me.”

“It makes it possible not just to survive but to prosper and perhaps even live life fully, or more fully,” he said. “It opens up possibilities for my future in a way that very little ever has.”

The Townsends’ multigenerational student loan saga will be familiar for many — too many — families.

Rebecca Townsend’s father, the child of immigrants, was determined to put his three daughters through school. He and his wife eventually filed for bankruptcy — there was a lot of medical debt — and when he died in 2003, he and her mother were still repaying one of Dr. Townsend’s loans.

She and her husband met at as undergraduates at the University of Massachusetts Amherst in the early 1990s — Mr. Townsend, 49, was the first in his family to graduate from college — and they eventually earned three advanced degrees between them. dr Townsend, 48, got a master’s and then a Ph.D., and is now an associate professor of communication at the University of Hartford. Mr. Townsend went to law school, and today he works to preserve criminal convictions that are on appeal.

Financing it all was expensive: Both of them consolidated their loans, repackaging them into two monsters totaling $203,000. PSLF provided a glimmer of hope, then came a crushing realization that the graduated repayment plan they had eventually chosen to better afford children made them ineligible for it altogether.

So they started over in a new repayment plan in 2015. When Congress enacted one of its patchwork PSLF fixes in 2018, they found themselves ineligible for it, too.

“It almost felt like a cruel joke,” Dr. Townsend said.

Late last year, they put in for the waiver and crossed their fingers. This month, Dr. Townsend got the good news. A few days later, Mr. Townsend received notice that his payments were delinquent.

Just kidding, a phone rep at the loan servicer eventually told him. There was an error, and his balance had also gone to zero.

Everyone who spoke to me expressed gratitude for the relief. Ms. Harrington cried when she got the news. Ms. Stewart’s wife also shed tears. Ms. Nuckolls reread her notification twice and then called her servicer to be sure. Mr. Negaard “may have whooped.”

They also told me of their resolve going forward.

Ms. Nuckolls, the assistant state’s attorney in Illinois, has her eye on a condo and hopes to become a first-time homeowner in her 50s. Ms. Stewart and her wife — who moved their two daughters into a home they bought in Hawthorne, Calif., last year — do not have to worry that student loan bills will derail them.

Mr. Negaard and his wife will pay down some of the mortgage on their 670-square-foot condo. They are daring to imagine travel away from Hawaii — and being able to afford to stay there during retirement. Ms. Harrington is pondering her next career move now that Mr. Portman is leaving the Senate, and she can consider private-sector jobs without worrying that a corporate position will endanger her attempts at loan forgiveness.

“We had been trying to save for college for both of our boys,” Dr. Townsend said. “We decided early on, before we had kids, that we did not want them to have the debt that we had. I know that my dad didn’t want that for his daughters, either.”