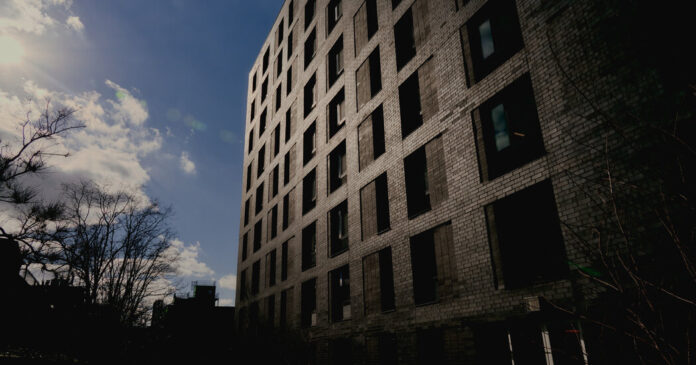 On the case front, good news is hard to come by. The eviction moratorium has expired. Experts are now predicting skyrocketing home prices could rise indefinitely. According to a Pew study, more American adults now view affordable housing as a bigger problem in their communities than crime, drugs or Covid-19.

And no wonder. The lack of affordable housing is intrinsically linked to racial and other inequalities in health, education, public safety, and economic opportunity. According to one estimate, New York is now the most segregated state in the nation. Not coincidentally, its deficit of nearly 650,000 affordable housing units is surpassed only by California.

Then, of course, there was that unfathomable week in January when a fire in a crowded Philadelphia row house owned by the beleaguered public housing authority there killed 12 people. Another 17 died days later when a heater ignited in Twin Parks North West, a privately owned 1970s Section 8 high-rise building in the South Bronx.

But slowly, despite opposition from NIMBY, more and more states are repealing single-family home zoning rules and legalizing so-called accessory housing units, or ADUs, that is, basement apartments, backyard homes, and converted garages. Last month, New York Gov. Kathy Hochul floated the ADU legislation in her speech to the state.

And former New York City Mayor Bill de Blasio, who for years focused his rezoning efforts on incentivizing construction of more subsidized housing only in low-income majority-minority neighborhoods, finally rolled out rezonings in his final days in office through a few largely white, more affluent neighborhoods. That opened the door for his successor, Eric Adams, to do more of the same. As Casey Berkovitz of the Century Foundation recently wrote, the foundations for a “fairer future” are being laid.

After the fires, I toured a few affordable housing projects that opened a year or two ago in the South Bronx not far from Twin Parks. I had been waiting to see her. Writing about architecture before buildings are operational is a guessing game. A few years isn’t long in the life of a condominium, but tenants can at least have moved in and asked how things are going.

In the 1960s, an apartment building with four residential units stood on this site, which was surrounded by social service providers and parking lots. Eventually the owner defaulted on the mortgage and in the 1970s the city took over the property. It’s a shame that New York, cash-strapped and seeing land values ​​plummet along with the rest of the city, sold so many vacant and foreclosed lots back then. The Byzantine economy of deeply affordable housing involves the contribution of public land.

Today, the Ministry of Housing Preservation and Development, which has created some excellent affordable housing projects on city-donated lots, has few large parcels in its inventory. What’s left are mostly tiny and tricky lots like 1490, which overlooks a subway viaduct and is partially taken up by a rock step.

Fortunately, Bernheimer is a gifted, imaginative architect who is familiar with the obstacles to affordable development, including challenging locations.

From the street—and from passing subway cars on the elevated tracks—the building he and his colleagues at Brooklyn-based Bernheimer Architecture designed catches the eye. Flat, recessed panels of pale yellow brick create a basket-weave pattern over a facade of dark enameled and dull gray brick. The recesses do the work of costly ornaments and cast animating shadows. Double-glazed windows shut out the chaos of the trains.

A second floor garden at the back floats on top of the rock. A rooftop terrace and gym offer views of the Manhattan skyline. Inside, custom lighting and swathes of light, multi-hued paint in the lobby and hallways improve orientation for elderly residents and highlight the well-proportioned public areas.

It’s a building that delivers an architectural bounty in small, cost-effective and dignified doses. “In terms of design, we wanted 1490 to be an inspiring building – not only for other architects, but also for the people in the neighborhood and most importantly for the residents, which we hope will make you feel at home and are proud of the building,” said Annie Tirschwell, one of Type A’s founders.

I checked in with James Hill, a resident who told me he’d moved to 1490 from what he felt was precarious lodgings in Far Rockaway, Queens. A janitor boiled water in his kitchen and volunteered that the building was the most beautiful place to work. Winter sun fell through a large living room window.

“Couldn’t be happier,” Hill told me.

Lambert Houses, across from the Bronx Zoo, is something else — a five-block campus of six-story apartment buildings that, like the scattered Twin Parks, were completed in the early ’70s. Phipps Houses, the venerable not-for-profit provider of affordable housing, built and still manages Lambert.

It was hailed by architectural writers and progressive politicians when it opened as a pioneering model for affordable housing and urban renewal. Designed by Davis, Brody & Associates, the complex, with its jagged facades, gaudy windows, and site plan with blocks around common courtyards, looked modern while evoking traditional mid-rise Bronx apartment buildings and a distinguished heritage of New York City courtyard buildings . At a time when urbanist Jane Jacobs was discussing foot traffic in and out of homes and businesses and choreographing a crucial “ballet” of the city’s streets, Lambert boasted 42 entrances and exits leading to interconnecting fire escapes and corridors.

But what initially seemed like a solution to neighborhood divestment and racist slum clearance policies turned into a problem. Lambert (Twin Parks followed a similar arc) was on the verge of bankruptcy just a few years after it opened. White, middle-class residents that planners expected would move in never materialized. Neither do their expected rents.

Davis, Brody’s supporting masonry walls were crumbling; Wooden beam ceilings sagged. All those entrances, exits, and epic corridors made Lambert a security nightmare. Adam Weinstein, president of Phipps, recalls that in the 1990s, officials at the neighboring Bronx Zoo put up signs at the subway station just around the corner, telling visitors to take a detour that bypassed Lambert.

In the archetypal story of the South Bronx, Lambert’s perseverance was thanks to a determined group of residents, an infusion of federal funds, and in this case, investment by Phipps. Now the development is in the midst of what Weinstein estimates could total $1 billion in rebuilding over the next decade, with Davis, Brody’s buildings gradually being replaced with new high-rises that permanently subsidized nearly 1,000 more Units promise a total of 1,665 low affordable homes.

The first of the new towers opened in 2019 – designed by Dattner Architects, the New York firm that collaborated with Phipps, developer Jonathan Rose and Grimshaw Architects on a novel development called Via Verde in the South Bronx a decade ago. Funds from the city’s Department of Housing Preservation and Development, Housing Development Corporation, Bank of America, and Phipps paid for the new tower.

It is an 18-story building with 163 durable affordable units and a doorman. The boxy, drab exterior a few steps from the street wall looks almost martially mundane. But inside, the building is comfortable, even luxurious, compared to the shabby apartments and hallways I’ve seen in the old buildings. It is crucial for the conversion that the new building does not displace any tenants.

Lambert’s transformation, Weinstein points out, is a potential template for the redesign of the New York City Housing Authority’s campus. As the proposed renovation began to develop a few years ago, Susanne Schindler in Urban Omnibus lamented that from an architectural perspective, a “visionary” example of low- and middle-income housing from the 1960s and ’70s, such as Davis, Brody’s Lambert, was lost a pity. That’s correct. From the street, the angular old buildings still catch the eye. Aesthetically, as Lambert’s new campus develops, Phipps and Dattner clearly need to up their architectural game rules.

But there is nothing to argue against the practical upgrading or renting of apartments.

“I love it,” Bonita Dent, 57, one of the high-rise tenants, told me. She has been a Lambert veteran for 20 years and moved into the new building two years ago with her three school-age grandchildren. The doorman and a single, secure front door were great incentives.

“I like the security we have downstairs – it’s different than before where you saw strangers in the hall. I’m not afraid to go in and out of my apartment.”

Nessie Panton, 84, was one of Lambert’s first tenants in the ’70s. One day, she said, she went to the zoo with her children and looked at the project while it was still under construction. She applied for an apartment and moved into a duplex, where she eventually raised her family.

“The new apartment is smaller, but my children are grown and here the doorman knows if you live in the building and takes pictures of you if not,” she said. She had heard about the fire in Twin Parks. “Here we have sprinklers and intercoms with fire alarms in the apartments. I feel a lot safer,” she said.

However, he warned, “design, compassionate as it is, can only have limited meaning against the obstacles that make up the housing problem today.”

The calculus is the same half a century later. But the South Bronx is not. It was gradually rebuilt. Progress is not impossible, it is a process.

“Inevitably, we’re going to do something wrong,” Weinstein said. “The question is, can we use mistakes as an opportunity to learn and move forward?”