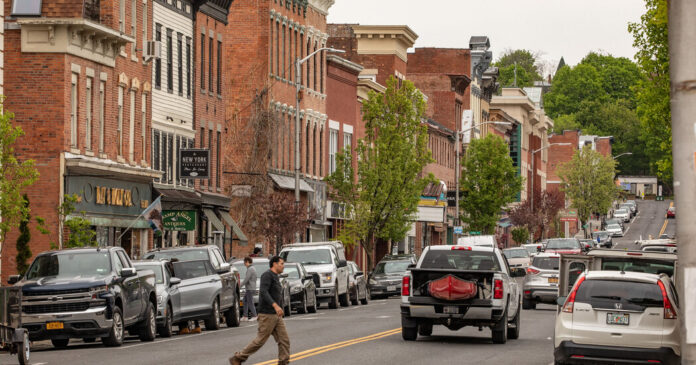 Rob Spillman and Elissa Schappell closed their Catskill, NY home, an 1840s farmhouse on 6.4 acres, in the midst of an ice storm in February. “We kept having to stop to get the ice off the wipers,” said Mr. Spillman, 57, a literary consultant and freelance writer who co-founded the now-defunct literary magazine Tin House with Ms. Schappell.

The couple, who had shared a brownstone in Park Slope, Brooklyn with another couple for 23 years, paid $825,000 for their new home in Catskill — $25,000 below list price — and managed to win one of the bidding wars to avoid, which have become the norm in much of the Hudson Valley. (They offered all cash to sweeten the deal, with plans to seek financing after the sale.)

Two days after moving, they were planning dinner parties at their 3,300-square-foot home. “A lot of our creative friends are already in this space,” said Mr. Spillman. “We sold half of a brownstone home for $1.825 million — a million more than we paid for it — and we have so much more space.”

Catskill is a place where “people are passionate about making art and investing in creating a culture that isn’t a microcosm of New York City, but something very special,” said Ms. Schappell, 58, magazine editor and professor for fiction. “The prospect of being part of such a community and all the opportunities it offers – new ways of thinking, new ways of seeing and living in the world – that’s a reason to get excited.”

The couple are among an influx of New Yorkers who are discovering how far their money can stretch in this city of just over 11,000 people without sacrificing access to culture. Once the home of 19th-century landscape painter Thomas Cole, founder of the Hudson River School art movement, Catskill has long been a center for artists and musicians. But two recent investments totaling more than $20 million have bolstered its reputation as an arts incubator: Foreland, an 85,000-square-foot fine arts campus housed in three 19th-century mill buildings that opened last August; and the Lumberyard Center for Film and Performing Arts, a 20,000-square-foot non-profit performing arts center that opened in 2018 on a former lumber yard.

Foreland founder Stef Halmos, an artist, chose Catskill for the project because it’s an “unpretentious and friendly” place, she said. “Lovable weirdos, artists, farmers, business owners and everyone in between are equals in this town, which is an unusual and endearing trait.”

After moving to Catskill from Fort Greene, Brooklyn in 2016, Ben Fain was so excited by the city’s potential that he invested more than $4 million and bought 10 buildings on Main Street, including a defunct movie theater, which he hopes to reopen as an art house cinema and music venue. His plan calls for two adjacent net-zero buildings that will house a boutique hotel called Mr. Cat; The hotel’s bar, restaurant and event space are located in a third building. Left Bank Ciders, a brewery and bar, and C. Cassis, a liquor distillery, currently occupy another building owned by Mr. Fain.

“I remember walking through the village and feeling such a strong sense of community,” said Mr. Fain, a sculptor who has also restored buildings in New York City. “I felt like I had an opportunity to be a part of what is already happening on Main Street and bring these buildings back to life.”

“My clients say they want Woodstock or Saugerties,” said Deirdre Day, a broker at Taft Street Realty who has worked with Mr. Spillman and Ms. Schappell. “I often say, ‘If you bring this money to Catskill, you’re going to get something much, much better.’ What Elissa and Rob got in Catskill would have cost so much more in Ulster County.”

what you will find

In the three-square-mile village in the heart of the 60-square-mile city, the architecture is a mix of styles. On the outskirts of town, buyers will find large farmhouses spread over acres – a testament to the small family farms that once dominated the landscape – as well as former inns and boarding houses.

Other new hotels in Catskill include Camptown, a $12 million motel-turned-year-round resort, and Treetopia, a 100-acre campground that’s divided into upscale accommodations with Airstream trailers, luxury cottages and glamping tents was converted.

Liam and Laura Singer moved to Catskill from Long Island City, Queens in 2016 and opened the popular Catskill Café HiLo the following year. “One of the things we loved about Catskill was the artistic energy,” said Mr. Singer, 40, a musician. In 2019, the couple added Avalon Lounge, a retro-themed nightclub with live acts and dance parties Wednesday through Sunday.

Even so, Catskill homes remain affordable by Hudson Valley standards. For comparison, the median price for a single-family home in Hudson in 2021 was $400,000.

Catskill houses are also snapped up faster. In 2019, the average number of days a home spent on the market was 118; last year that number dropped to 50.

Low inventories are a problem throughout the Hudson Valley. According to the nonprofit research group Hudson Valley Pattern for Progress, the number of homes for sale in the Hudson Valley fell 52 percent between 2019 and 2021, from 11,777 to 5,657. In mid-May, Zillow featured 21 listings for single-family homes in Catskill, ranging from $154,900 for a two-bedroom village cottage to $7.495 million for a six-bedroom estate on 17 acres with a Hudson River frontage.

The typical Catskill property tax bill is about $4,700 city and $6,800 village, according to the city tax office.

In a town where everyone seems to know everyone, the sense of community that came over Mr. Fain is palpable. “You can’t be anonymous,” he said. “That’s one of my favorite things about Catskill.”

Residents also gather downtown for the annual Cat’n Around Catskill, which is like the CowParade in New York City but with cats. From Memorial Day through Labor Day, around 50 fiberglass cat sculptures appear along Main Street, and the event culminates with a gala and auction to benefit the Heart of Catskill Association and their efforts to revitalize the business district, which is on the National Register of Historic Places.

According to the New York State Department of Education, the Catskill Central School District serves about 1,350 students in kindergarten through 12th grade. The district is 66 percent White, 14 percent Hispanic, 12 percent Mixed Race, 7 percent Black, and 1 percent Asian or Pacific Islander.

The high school graduation rate was 94 percent in 2021, compared to 86 percent for the state.

Catskill is about a five-minute drive from Exit 21 of the New York State Thruway and less than two hours from the George Washington Bridge, depending on traffic.

Commuters can catch the Amtrak train in Hudson, a 10-minute drive from the village of Catskill. Round-trip tickets to New York City range from $62 to $148, depending on when the ticket is purchased and whether it is peak or off-peak. A monthly pass costs $1,008. A six-month permit is $650 and an annual permit is $1,000.

Trailways offers limited bus service to New York City, with one departure per day from Park and Ride exit 21 and long stops in Kingston. The fare is $76 round trip.

The New York State Legislature established the city of Catskill in 1788 and Greene County in 1800. As the region became known for its resorts, steamboats brought tourists to Catskill’s fashionable Prospect Park Hotel, according to a history compiled by the Catskill Community Center.