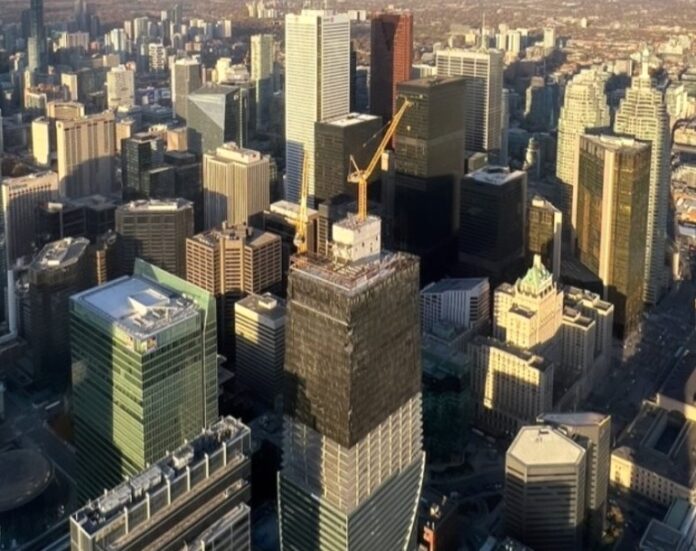 The drama of the Toronto September sky set the perfect stage for a case study highlighting the elegance of curtain wall glass, and a new star of the show this year was one of UrbanToronto’s most followed projects, 160 Front West.

View from the CN Tower at 160 Front West, image by AlbertC, contributor to the UrbanToronto Forum

The Cadillac Fairview project has caught the attention of architecture enthusiasts – and anyone who happens to walk by the building – with its unique, sophisticated design by AS+GG Architecture and B+H Architects, but the real success story of the project was in the physical Space realized, with a stunning exterior that goes beyond bringing its renderings to life.

Looking up at the curtain wall at the southwest corner of 160 Front West, image by UrbanToronto Forum contributor Undead

As the concrete formation transitions to the steel frame to complete the tower’s sweeping crown, the 46-story building is still pushing forward to reach its final height of 240m. Since UrbanToronto’s last update on the construction of 160 Front West, the project has reached several milestones worth celebrating, so today we’re taking a closer look at them and what’s next.

Looking southwest of the completed design of 160 Front West against the nighttime skyline, image from submission to the City of Toronto

One of the aspects of the project that reflects the construction progress of the building was the gradual installation of the arched metal frame that spans the lower south-east corner of the building. The two curving lines that define the boundary between the angled glazing of the tower floor and the flatter glazing that meets the preserved historic walls have grown steadily upwards from the base of the south and east facades, their upward movements directly linked to the installation are of the facade system.

Looking up at the glazing on the southeast corner of the tower, image by UrbanToronto Forum contributor Riseth

On September 23, UrbanToronto Forum contributor mburrrrr captured a picture of the moment the Apex was installed, marking a relatively small victory in the project’s grand scheme, but one worthy of in the history of this dynamic one to be mentioned on the outside.

Looking west at the top of the domed frame installation, image by mburrrrr, contributor to the UrbanToronto Forum

Looking at the progress of the building’s vertical ascent, another notable moment was documented a few days later, on September 29, when UrbanToronto Forum contributor BermudaTO37 photographed the removal of the black formwork with the TD logo that covered the concrete core of the building. This indicates that the core has now reached its final height of over 46 stories, and with the steel skeleton floors close behind, the forming of the building structure was entering its final stages.

Looking northwest as the black TD logo is removed from the core of the building, image by UrbanToronto Forum contributor BermudaTO37

In early November, a picture by UT Forum contributor Red Mars shows a double-height steel-lined floor, the first of more atypical levels being built to complete the building’s crown. Containing only partial floors of the commercial space and mechanical penthouse facilities, the crown acts more as a culmination of the building’s tapering figure, capping it with a curved apex that descends from west to east on the already irregular mass.

Meanwhile, a section of the crew on the ground floor has been overseeing monument work to restore the historic facade that occupies the south-east corner of the building. The latest milestone in this process was captured by UrbanToronto Forum contributor Red Mars on Nov. 12 in an image showing the new windows that were installed as part of the upgrade. The dark blue frames are reminiscent of the original character of the building and are another visual element in the already stimulating pedestrian zone.

It should be noted that the lower floors of the historic walls were held in place during construction, while the upper floors were dismantled, taken out of construction for restoration, and reassembled once the new structure was in place behind them to fortify them could become. Passers-by should be unable to tell the two restoration approaches apart when all the site fence work falls off: the work appears to be seamless.

To put things in perspective, charts created by UT Forum contributor Contra provide a useful timeline of construction progress going back to April 2021. The light gray shows the building to come, and as the latest diagram shows, the finish line is close.

UrbanToronto will continue to monitor the progress of this development, but in the meantime you can learn more from our database file linked below. If you wish, you can join the discussion in the dedicated project forum thread or leave a comment in the space provided on this page.

UrbanToronto has a research service, UrbanToronto Pro, that provides comprehensive data on metro Toronto development projects from concept to completion. We also offer instant reports, downloadable snapshots based on location, and a daily subscription newsletter, New Development Insider, that follows projects from the first application.