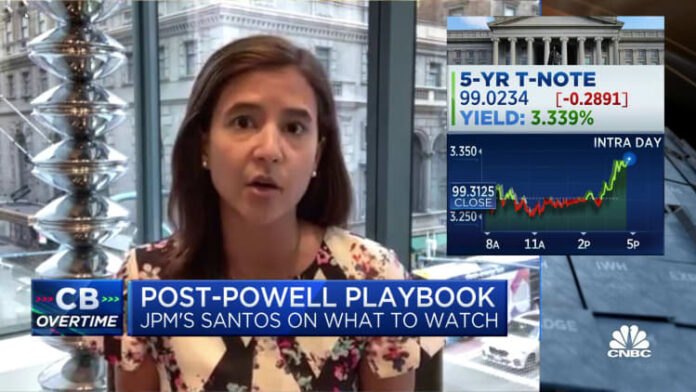 Cleveland Federal Reserve Chair Loretta Mester said Wednesday she sees a much higher rate hike before the central bank can relax its fight against inflation.

Mester, this year’s voting member of the rate-setting Federal Open Market Committee, said she sees interest rates rising above 4% in the coming months. That’s well above the current 2.25% to 2.5% target range for the federal funds rate, which determines which banks charge each other for overnight lending but is tied to many consumer debt instruments.

Markets are currently pricing in only a 1 in 3 chance that the overnight rate will rise above 4% next year.

“My current view is that it will be necessary to raise and maintain the fed funds rate to just over 4 percent through early next year,” she said in prepared remarks for a Dayton speech. “I don’t expect the Fed to cut interest rates next year.”

Consistent with this, Mester said rates will remain elevated “for some time,” a phrase used in recent days by both Fed Chair Jerome Powell and New York Fed Chair John Williams. She said real interest rates, or the difference between the fed funds rate and inflation, “need to go positive.”

The Fed has hiked rates four times this year by a total of 2.25 percentage points. Markets are pricing in a third straight hike of 0.75 percentage point at the September meeting and anticipate rate cuts to begin in the fall of 2023.

Mester said she expects the rate hikes to result in slow economic growth, which she says is “well below 2%” while the unemployment rate is rising and financial markets remain volatile. She expects inflation to fall to a range of 5% to 6% this year and move closer to the Fed’s target in subsequent years.

In a concession to those looking for lower rates, she said she doesn’t think the Fed needs to keep raising rates until inflation hits the central bank’s 2% target. But she said politicians must remain vigilant.

“It would be a mistake to declare victory over the inflation monster too soon. That would take us back to the world of stop-and-go monetary policy in the 1970s, which was very costly for households and businesses,” she said.