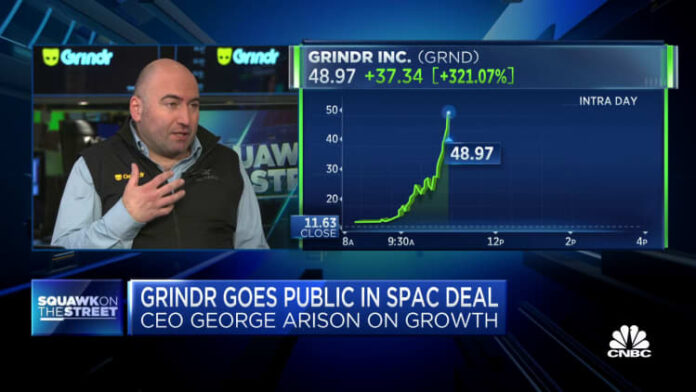 Traders, bankers and tourists weren’t the only ones hanging out on Wall Street Friday morning. Drag queens were there too.

The group of performers, some known for appearing on the competition show RuPaul’s Drag Race, performed on a rainbow stage in front of the New York Stock Exchange. It was part of a celebration of LGBTQ dating app Grindr’s IPO following a merger with blank check company Tiga Acquisition.

Under its new ticker GRND, the company started trading on the NYSE at $16.90 per share on Friday and jumped to a high of $71.51 during the session. The stock’s value more than doubled to $36.50 by the close.

Grindr CEO George Arison, who has been in office for about a month, was quick to call the debut a reflection of broader LGBTQ inclusion in both finance and more generally.

“It’s quite an incredible thing that the company, whose primary user base is gay and bisexual men, and which was built by and for the LGBTQ population, with an employee base that is also strong in this cohort of the population, is now going public ‘ Arison said. “It’s nothing that didn’t happen 20 years ago, it probably wouldn’t even have happened 10 years ago.”

He said on CNBC’s “Squawk on the Street” on Friday, about an hour after officials from the company rang the opening bell, that the low volume of shares available and interest in the company helped propel its initial rally.

Before the opening bell, New York Stock Exchange President Lynn Martin spoke about the importance of an LGBTQ-centric company’s place in the stock market. In fact, it wasn’t until 2015 that the US Supreme Court ruled that the Constitution guarantees same-sex marriage rights. Martin was one of several speakers who noted the poignancy of the platform holding this celebration in the same neighborhood that hosted the first of several demonstrations protesting for more awareness of the AIDS epidemic some 35 years ago.

“Can you imagine what those 250 people would think if they saw us all here today?” she said of the protesters. “They would celebrate the fact that through freedom of expression they could pave the way for a fairer future, a fairer society – one that does not discriminate on the basis of colour, race, gender or who you love. “

“The Power of the App”

The excitement surrounding Grindr’s debut doesn’t diminish the difficulties of the current bear market. Information technology and communications services stocks were particularly hard hit S&P500 Sectors are down 24.5% and 37.8% respectively so far this year.

Grindr’s debut also comes in a year where other dating apps are thriving bumblebee and Fit down 31.7% and 64.9% year-to-date. Grindr’s reputation has been mixed, with some saying it’s better known for socializing than dating, but the company markets itself as an online community space.

The app is also challenged by Motto, a new unlisted platform created by Grindr founder Joel Simkhai. He left the company five years ago.

Arison said Grindr will set itself apart from the competition, in part by noting that it’s more like a social network, given its LGBTQ-themed resources on topics related to HIV preventive medicine and monkeypox, as well as company data showing that the average user spends 61 minutes per day on the platform.

“We have this very unique engagement with our user base,” he said.

A bear market doesn’t negate the long-term benefits of the public, such as increased hiring potential, the ability to raise capital and potential mergers or acquisitions, he said. In addition to goals to continue expanding monetizable offerings like subscriptions and profile “boosting,” the company might consider adding elements like travel recommendations to improve user experience, Arison added.

Meanwhile, he said Grindr looks forward to sharing what he calls a strong business model with Wall Street. He said it generated $90 million in revenue for the first half of 2022, a 42% growth compared to the same period last year. The company also posted Adjusted EBITDA growth of 26% year over year.

According to Arison, Grindr is unique because it only spends 1% of its revenue on marketing due to its high brand awareness among its target audience of people who identify as men and are interested in others who identify as men. It had about 11 million active monthly users in almost every country in the world in 2021.

He said any concerns about how homophobia might affect trading performance have been washed away by meetings with investors and others in the financial community who seem interested in the business and how it might trade. For all of 2022, Grindr is expected to have a total addressable market of $4 billion.

Arison was surprised to see “the understanding of the app’s power for the community and its users, and how much understanding investors have of what the app is doing for people,” he said. “That was super encouraging and exciting.”

“The picture is bleak”

Proponents say that Grindr’s IPO undoubtedly marks a milestone for its incorporation into financial services, but it can’t overshadow the many areas where much more progress is needed.

Banks have overwhelmingly voted to support gay marriage and equality, said Michael Maldonado, communications chair for advocacy group Out in Finance. But Maldonado said financial services can still exclude people who don’t fit into a straight, white and cissexual image, noting the difficulties faced by photo and video sharing platform OnlyFans, responsible for its use known to monetize sexually explicit content when attempting to go public.

He pointed to the specific hurdles faced by transgender people trying to enter the field and the lack of LGBTQ company involvement in environmental, social and governance investments as two areas that still need improvement have to.

“It’s saying a lot that there were investors who were willing to associate their name with what this company is known for and help bring it to market,” Maldonado said. But “that’s not the only thing that’s happening in our industry.

There’s also a lack of standardized research on the support LGBTQ companies receive when trying to raise finance, said William Burckart, the co-founder of Colorful Capital, which helps connect these companies to capital. He also said these companies are struggling with few investors willing to take the lead, which requires the most risk.

Burckart said micro and macro aggression continues. He has heard from one owner who was told she had to bring a man with her in order to be “taken seriously”. A trans woman founder was asked, “Are you really a woman?” while going through the due diligence process with a gender biased investment firm.

“The LGBTQ-plus community is something of a gray area on the economic map of the world,” he said, noting that the blame does not lie with LGBTQ people themselves. “In reality, it’s like we know the picture is so murky that we can even see the picture.”

Still, Maldonado and others note that Grindr’s success could result in it being covered by analysts or potentially indexed, which would increase its reach. Arison said it contributes to a picture of progress that was enhanced this week when the House of Representatives passed legislation that would codify gay marriage.

And as Martin prepared an excited crowd to see Grindr leadership ring the opening bell on Friday, she felt the importance of freedom of speech in the stock market.

“The only way we can advance a society is through a real expression of freedom,” she said. “That’s why we’re so excited to celebrate Grindr’s IPO today.”