This section is Presented

This section was created by the editors. The client was not given the opportunity to restrict the content or to check it before publication. 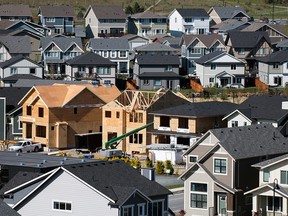 The pace of new home construction began to reverse in April, bucking a downward trend that lasted for most of the year, according to data from Canada Mortgage and Housing Corp.

“On a trend and monthly basis (seasonally adjusted annual rate), the level of housing starts in Canada remains historically high, hovering well above 200,000 units since June 2020 and rising from March to April,” CMHC chief economist Bob Dugan said in a press release accompanying the data.

Toronto saw a 38 percent decline in its seasonally adjusted, annualized pace, with April launches falling to 24,605 ​​units. Toronto faces a housing shortage that is struggling to keep up with the immense demand in Canada’s most populous city. Housing will be a key issue in Ontario’s upcoming provincial election as party leaders announce their plans to tackle housing affordability.

In the province’s last budget in April, the Doug Ford administration pledged to set a goal of 1.5 million new homes over the next 10 years.

The plan would also target demand, as Treasury Secretary Peter Bethlenfalvy said the government would stick to its plan to increase the speculation tax for non-residents from 15 percent to 20 percent.

Overall, urban housing starts saw a monthly increase of 10 percent to 245,324 units in April, mainly due to increases in multi-family housing of 14 percent to 178,092 units. Single-family homes in the city rose about one percent to 67,232 units for the month. Rural housing starts came in at an adjusted annual rate of 22,006 units.