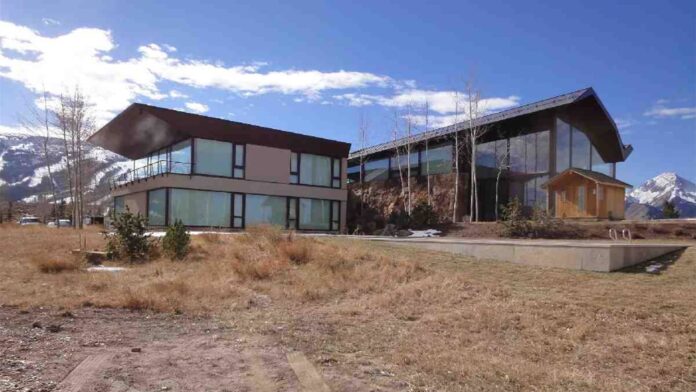 A Rocky Mountain mansion owned by Russian oligarch Roman Abramovich would likely be among the first assets frozen by the US government if sanctioned by the White House in response to the war in Ukraine, according to lawyers and real estate executives.

Among Abramovich’s many global real estate trophies is a 14,000-square-foot modern mega-home on 200 acres in Snowmass, Colorado, just outside of Aspen. The Russian billionaire, whose fleet of yachts, football team and huge homes in London, France and St. Bart’s have made him well known in the west, bought the property in 2008 for $36.5 million. Local realtors say the property would likely sell for well over $50 million given the soaring prices — making it the second most expensive home ever sold in the Aspen area.

“It’s an incredible property and very rare,” said Riley Warwick, co-founder of Aspen-based brokerage team Saslove & Warwick at Douglas Elliman Real Estate. “Many of my clients have asked for it.”

Abramovich also owns a 5,500-square-foot chalet-style home in Snowmass Village, which he purchased in 2008 for $11.8 million, local property records show. The property, just down the street from his larger home, likely doubles as a guest house, caretaker’s house, or ski house given its location next to the slopes, local agents say.

Experts say the properties are prime targets for asset freezes if Abramovich is sanctioned. Unlike most properties owned by oligarchs in the US, the Snowmass properties were purchased and remain in Abramovich’s name, according to local property records. The government can more easily and quickly seize assets officially owned by a sanctioned person because they do not have to go through legal processes to determine ownership.

Most US real estate owned by Russian billionaires and oligarchs is held by anonymous shell companies or LLCs to hide their true ownership. Many oligarchs have also transferred their US properties to relatives or partners in recent years. Oleg Deripaska has transferred his US properties, including two townhouses in Manhattan and a home in Washington, DC, to relatives. Abramovich transferred ownership of three Manhattan townhouses to his ex-wife Dasha Zhukova in 2018.

Abramovich was sanctioned in the UK and Canada, but not in the European Union or the US. The White House is currently weighing whether to include Abramovich in its next round of sanctions, according to people familiar with the discussions.

Abramovich’s spokesman could not be reached for comment. A Denver attorney, Brad Schacht, who represented Abramovich in a lawsuit against Comcast Cable over a fiber optic project on the property, did not respond to a request for comment.

The threat of confiscation from the Justice Department has already sparked widespread speculation and intrigue in Aspen, a small town with vast wealth and huge homes. Wal-Mart heiress Ann Walton Kroenke, L Brands founder Leslie Wexner, food and beverage magnates Stuart and Linda Resnick own homes there along with the parents of Jeff Bezos and media magnate Byron Allen. Goldie Hawn and Kurt Russell are longtime Aspenites, and the Kardashians, Kate Hudson and Kevin Hart are among the parade of Hollywood regulars.

Locals say Abramovich used to be better known in town and hosted a New Year’s Eve party with the Pussycat Dolls in 2008. He has also donated to local charities, with his name prominently featured as a donor on the Chabad of Aspen page. Local property tax records show he was recently billed in property taxes of $68,000 for the large home and $29,000 for the smaller lot.

For the past decade, however, Abramovich has stayed out of the local limelight. Local business owners and residents say he rarely, if ever, visits. The property is ideally suited for privacy, set in 200 acres at the end of a secluded, narrow mountain road with only one other house. Abramovich could easily make the 15-minute ride from his private jet and stay at his home without public scrutiny, locals say.

“This home is very private and secluded,” said real estate agent Warwick. “He could slide in and out easily without anyone noticing.”

Well-known in architectural circles, the house was designed by New York-based Voorsanger Architects. Perched nearly 1,000 feet above Snowmass Village, it rises like a giant wedge of glass along Wildcat Ridge. Its steel folding roof, which looks like a giant wing, is designed for heavy snow loads and cantilevers 40 feet over the driveway.

Inside, the home is clad in sleek black walnut, with floor to ceiling windows offering dramatic views of Capitol Peak, Mount Daly, the Roaring Fork Valley and Aspen. A 12 foot high moss rock wall separates the east and west wings. Realtors say Abramovich added millions of dollars worth of improvements to the home, including underground space.

If Abramovich is sanctioned, the US Department of Justice’s new KleptoCapture Task Force could likely freeze the property, but not seize or take possession. Sanctions experts say the government can only win a title if it can prove Abramovich committed a US crime.

In the meantime, potential solvent buyers are already circling. Like many post-pandemic ultra-rich cities, Aspen has a shortage of luxury homes for sale, with buyers far outnumbering sellers. According to Douglas Elliman Real Estate, the supply of single-family homes in Aspen is down 60% from a year ago. The median home selling price in Aspen is now a record $13 million.

“A lot of my clients ask about the status of the house and whether it’s been frozen,” Warwick said. “There was no information.”

Warwick said brokers hungry for listings also likely approached Abramovich to get him to sell.

“He’s not the easiest guy to get hold of at the moment,” he said. “But I wouldn’t be surprised if a lot of brokers tried it.”