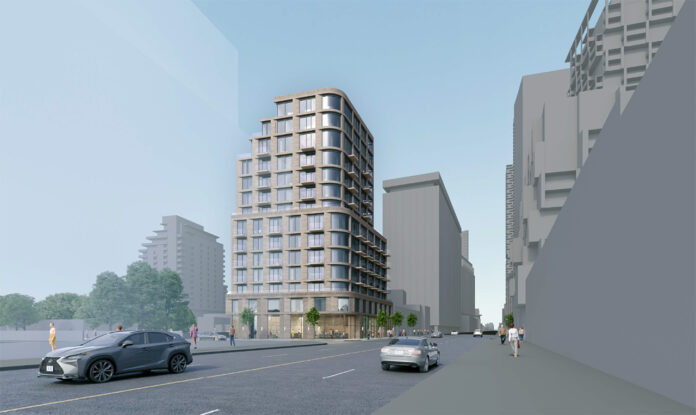 On the northwest corner of Yonge Street and Hillsdale Avenue in Toronto’s Midtown, Reserve Properties has proposed to develop a 12-story mixed-use apartment building designed by IBI Group at 2128 Yonge Street. Originally submitted to the city in 2017, Reserve revised and resubmitted the application to rezon the property, and now the revision has been approved by the city council.

Comparison of 2128 Yonge before and after revision, image from city filing

While the revised proposal looks different, it shares many similarities with the original proposal; It also includes commercial/retail space on the ground floor, residential units on the floors above, and uses the rear public alley to access the two-story, 19-space underground car park via a car elevator. However, there are a number of changes.

Compared to the previous proposal, the revision is reduced from 13 to 12 stories while the building is now terraced on its top floors on its west side, allowing the building to fit under a 45% angular plane from the west curb of Duplex Avenue west of the U Line 1 railway ditch to minimize shadows on the adjacent low-rise housing development.

The city was pleased with the building’s new height, saying that “the revised massing appropriately relates to the building heights on the west side of Yonge.” The city also agreed that the proposed building “achieves a reasonable rear transition and helps achieve compatibility with the west of the site.”

Before and after the rear transition of the building, image from the handover to the city

Base of 2128 Yonge with retail, image from city filing

City planning had proposed moving the residential lobby away from Yonge Street to encourage more active use to the west should an open space be established there in the future. The updated design moves the lobby along Hillsdale Avenue West and takes the opportunity to bring an interior design to this space. This allowed the design team to maximize the commercial/retail presence along Yonge Street with a continuous storefront.

For more information see our database file for the project linked below. If you’d like, you can join the conversation in the associated project forum thread or leave a comment in the space provided on this page.