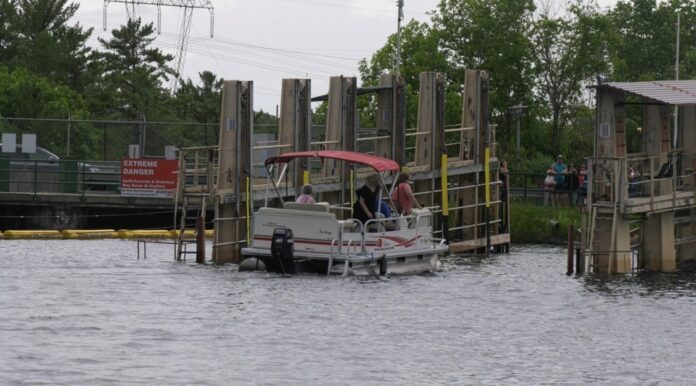 Dozens of boaters have been stranded on the Trent-Severn Waterway for days.

Last week, Parks Canada said it had to reduce its workforce due to COVID-19 infections, which resulted in lock 44 in Big Chute preventing all large boats from passing the seaway.

“While currently available personnel continue to be trained in full site operations, capacity has been further reduced to allow passage of larger vessels,” Parks Canada said.

While staff are trained and infected staff are able to return safely, boats continue to arrive at the lock, causing a growing backlog.

“There’s probably 15 to 20 boats here all trying to get through,” said Robert Honcharski, a New York boater. “Some friends [were] with us and got stuck behind us. They’re probably 25 down, waiting to get down here, but there’s nowhere to stay.”

Parks Canada said it expects to return to normal service by the middle of next week.

Although several boaters have told CTV News in recent days, communication has been limited.

“I’ve tried speaking to the locking staff with no answers. That’s the frustrating part. People need to get back to work, including me,” said Hamilton’s Michael Sorensen.

Some stranded boaters are having to consider options such as separating from family and hiring a car to drive home until the problem is resolved.

A local cottager has since agreed to help.

“I have transportation to take them to Midland and pick up some stuff and I can help them out,” said Richard Shead, a Burlington resident who owns a cabin in Big Chute.

Park Canada said staff would continue to pass through as many vessels as possible that are outside of restrictions and are asking boaters en route to Lock 44 to make alternative plans or slow their progress until things get back on track.